At 10am we leave for Barford. We’re all a bit tired but I’ve got no aches or pains from the night before so that’s a blessing! It’s incredibly windy when we get there, but there’s no rain, much to Frankie JJ disappointment. They have time for a short practice, JJ seems fine but Phoebe doesn’t seem so quick.

It’s a 1.00pm start and both get ready for their first heat. Phoebe has now gone up to Red top and is worried that she will not do so well – she could have fooled us! She’s going really well and improves her racing line throughout the race to get third. Frankie JJ is also having a good race with a couple of red tops and gets sixth place.

Back in the pits the cars are refuelled and I make a few adjustments to Phoebe’s car. They go out for heat 2. Frankie JJ is going well, holding his own with the more experienced drivers, Phoebe on the other hand is struggling in this one. They both manage to finish, Frankie gets 6th and Phoebe 7th. 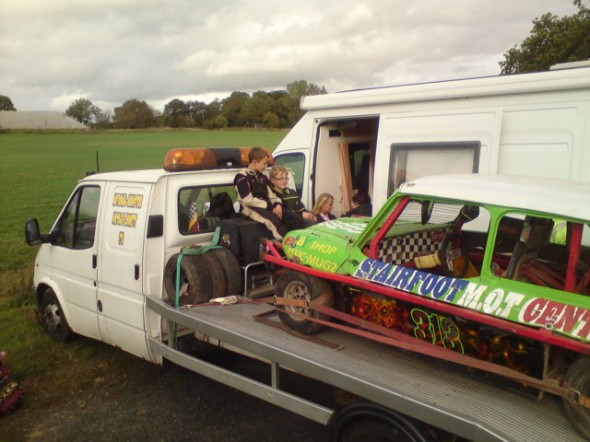 Judging by the way Phoebe slammed on her brakes and got out of her car when she got back to the pits I knew she wasn’t impressed! She said ‘whatever you did to the car change it back!’ before marching off to the truck followed by a door slam! She has her mother’s temper! Okay, I admit I made a mistake and probably should have left it. So I do as I’m told and change it back again. 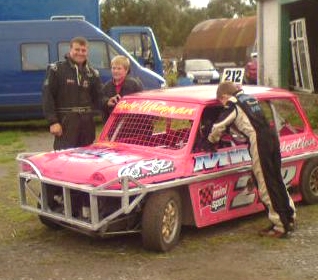 Phoebe has calmed down, and little Frank is always calm as they go out for the final. The start is appalling! The gaps are too big, almost three-quarters of a lap between whites and superstars. The whites are off a bit too keenly and everyone waits for the waved yellows to come out, the marshals on the infield are waving yellows but the starter has gone green!

So the blues, reds and Superstars didn’t get going at first but then realise they had to as the race had started. Couldn’t believe they didn’t restart it!

Obviously this meant that the higher graders had to work even harder as there are some very quick whites and yellows out there at the moment. Phoebe proves my ‘set up’ idea wrong as she’s back to how she was in her first heat, she’s passed by Mad Max but tries her best to stay with him and finishes in fourth place. Frankie is also going well and gets seventh place.

So with no damage or problems they go out again for the last time today. This race was started by Faye Smith (48) as she had retired from her days racing. And it was a much better start than the last! Well Done Faye!

Again a fast race, Phoebe is making her way through the pack and is going well, hot on her tail is Little Frankie, he seems to have upped his game in this one. Mad Max wins, James Riggal is second and Phoebe is third. Frankie keeps with up with the superstars and finishes in fifth place.

A great day had by all! No damage which makes life a little easier. We stop at a pub on the way home for our tea and get home at a reasonable time. All is good!