We arrived at the track nice and early as we had been to a party 10 miles down the road the night before. Arriving at Belle Vue at 9.35, the stadium was already busy with plenty going on. 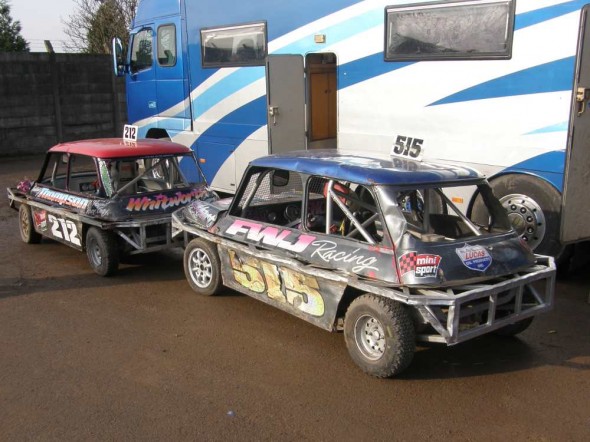 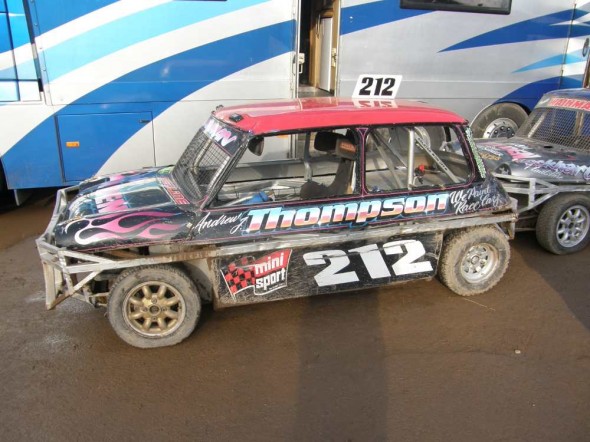 It’s just me and the kids racing today. Daniel decided to opt out due to team racing rumours; he thought if he didn’t race then no one could point the finger and accuse him of anything. Sad, really, but with emotions running high and tongues wagging Danny didn’t want to get involved and who can blame him? Instead he drove an F2 and really enjoyed it! 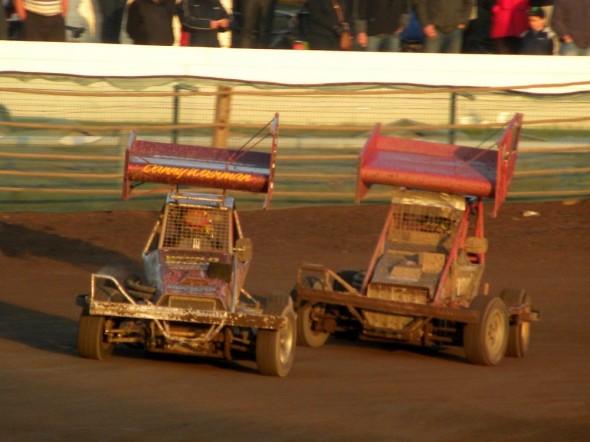 Before the meeting gets underway, the top 10 shoot-out drivers go onto the track for a bit of a build up before the battles begin. It’s two-thirds this afternoon, and we all pick our heats out of a hat. I choose heats 2 & 3, the same as second place man Dan Johnson! Typical!

Before we even drive off back to the pits the Mini-stox are lining up. Both Phoebe and Frankie are in this, so I quickly take my car back so I don’t miss their start.

The ‘mini team Wainmans’ didn’t let us down. Phoebe drove great throughout and had a great battle with Bradley Harrison exchanging positions. She finished in fourth place. Frankie JJ dropped back at the beginning of the race but then seemed to come back from nowhere. His last few laps were faultless and he crossed the line in sixth place. 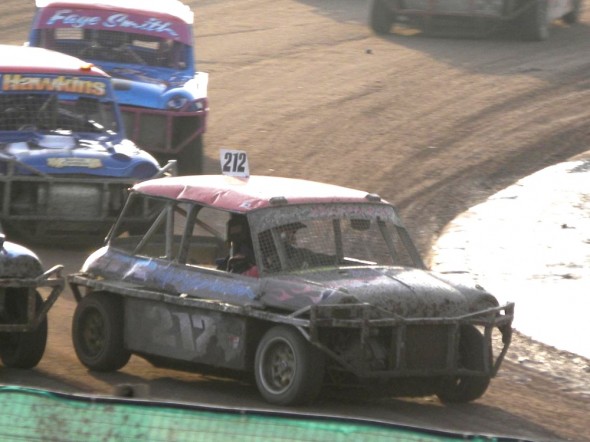 It’s time for my first heat, I’m not nervous but I suppose the pressure is on? I want to win the Silver for my fans and family as much as I do for myself, but with 5 shootout drivers all going for it, anything could happen.

So the race begins and I drive cautiously and by doing so manage to avoid a few pile ups. I get into second place behind Neil Shenton (35). The race is stopped and Dan Johnson lines up behind me! On the restart I get off pretty well and pull a bit of ground on 4. Still I can’t catch Neil Shenton who’s going really well. So second is good enough.

The Mini-stox are back out, just Phoebe in this one. Once again she’s driving really well and into fourth place, with a top 3 looking likely until her car seems to die. Then she goes again before dropping back again. Her last 5 laps were like this and she lost a few place finishing in eigtht. Back at the truck she explains that her car kept jumping out of gear so before she goes out for the final, we attach a bungy strap to hopefully keep it in gear. 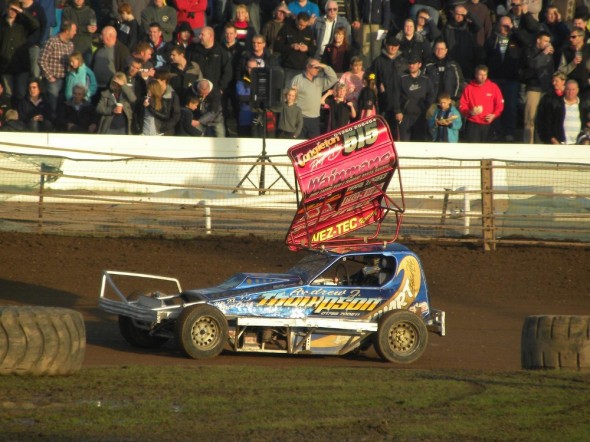 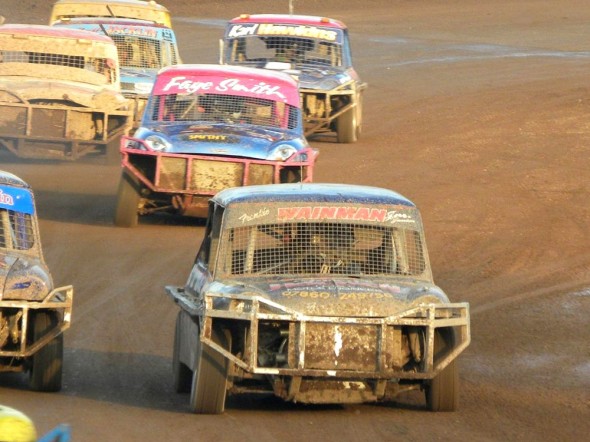 Time for my second heat. Again I try to do the first few laps cautiously, hoping to avoid trouble. Everything goes well and I finish in second place again, but the other shoot-out drivers are picking up valuable points too.

Out next is the Mini-stox final. Both have qualified so are able to start in their graded positions. Frankie gets a great start and quickly makes his way to the front of the blues. He manages to get into second, and then takes Matthew Venables (60) for the lead.

But the yellows are out and Frankie has a flat tyre. The restart didn’t go too well, he was rammed before the green flag dropped and then got spun. He carried on but had problems with his clutch, and before he could retire was hit by another racer but managed to get onto the infield.

Phoebe was having a good race and once again managed to get into fourth before getting spun and recovering into eighth. 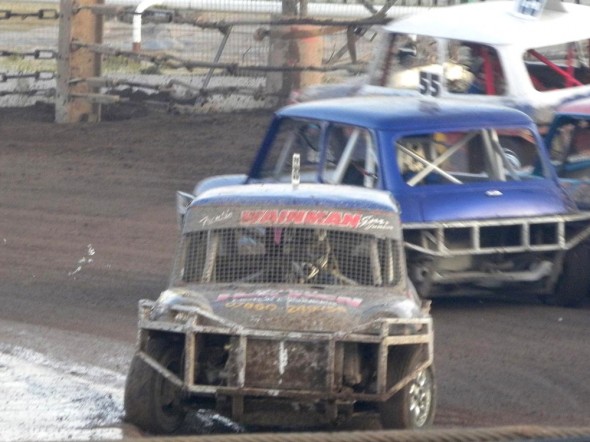 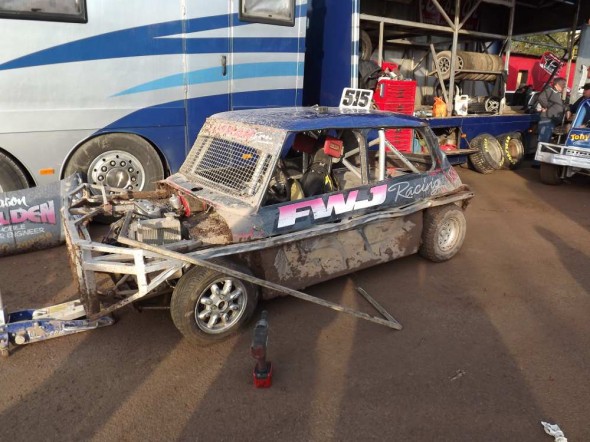 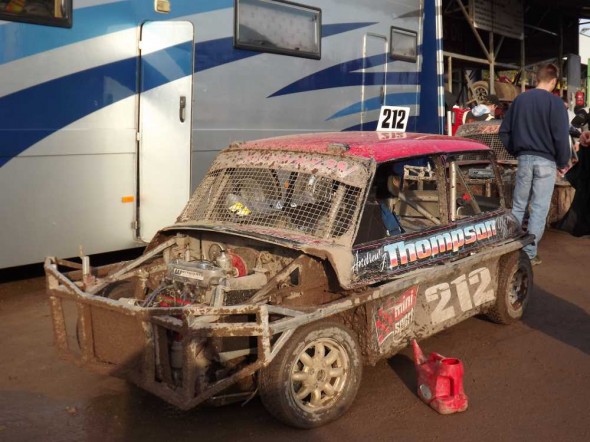 I’m out for the final. A good race, I get delayed once or twice but nothing major. I catch Andy Smith and we spend a good few laps racing. To be honest, I was half expecting him to clean me out and he could have done just that on several occasions, but instead he drove a clean honest race and we battled until the end with me finishing in second and himself in third. Craig Finn “Mr Cool” takes the win which is just what he needed to still be in with a chance of the Silver roof. 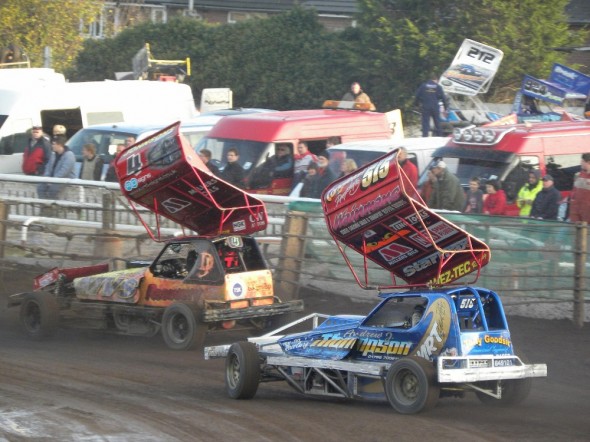 Going into the National I think the shoot-out is now between me, Craig, and Dan. I’m 14 points in front of Craig and 21 ahead of Dan. I worked out that I needed a top 2 place, so didn’t hang about and got going, until Dan Johnson followed me in and flattened both back tyres. Craig drove a blinder and got a top 10 winning the Silver!

So a night full of second places for me. Not bad for someone over the hill!

Congratulations to Craig and his family. He drove well and consistently throughout! Well done to all shoot-out drivers, it’s been hard going and I for one am glad it’s finished, as I’m sure so will be the others?

Thank you to Chris Green of H.E.M.T. for sponsoring the Shoot-Out.

And a big Thank You to all sponsors, mechanics, family, fans, etc… for your never ending support!