Both transporters leave the farm this morning. Sam’s taking Phoebe and Frankie JJ to Barford and I’m going to Belle Vue for Shoot-Out round 6.

We have had a very busy week, as well as customers cars to build I have been spending any spare time rebuilding Phoebe’s engine. She needs to start it and leave it running for a bit before she takes it out. In practice she takes it steady and everything seems okay. Frankie goes out for a short practice too and looks quick. 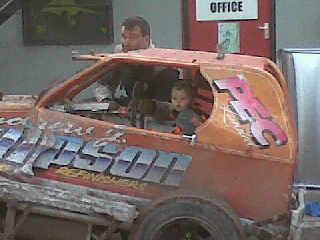 The team get younger every meeting!

The Police are at Barford to check fuel samples, just making sure nobody is using red diesel. They check under our transporter looking for a concealed tank; they didn’t find one. Out of 100 drivers they found 4 using it, and none from the Mini-stox clan.

Today it’s the Northern Championship and Phoebe starts off front outside row and Frankie on the fourth row inside. It’s the first race and Sam rings me as their on the rolling lap to talk me through the race.

The start isn’t good, everyone is pushing and Phoebe gets pushed wide and Frankie JJ is spun. Phoebe has dropped down to seventh place but starts to make her way back up. She catches Karl Hawkins and Hayley Williams and looks quicker but struggles to pass, still she somehow manages it and gets into fourth place. On the last lap Phoebe, Karl and Hayley are all pretty close and Hayley puts in the bumper and pushes Karl and Phoebe wide. So Phoebe finishes in sixth and Frankie ninth.

Now it’s time for me to go out for my first heat. Today’s meeting is two-thirds and I’m in heats 1 & 2. I got decent start and the car feels good. A few pile ups and cars to dodge but still I finish in fifth place which is okay. Danny, who has just had an engine put together, has bad luck throughout and fails to finish.

Phoebe and Frankie go back out for their second race. Dan Clifford and Wez noticed that Phoebe’s car was puffing a bit of smoke out coming out of the bends so we have to keep an eye on that. Phoebe struggles in this one and doesn’t look her usual self. Frankie JJ however looks like he’s on rails as he holds his own and apart from Max 777, he doesn’t let any of the other super stars pass. He finishes second behind Max and Phoebe gets ninth place.

Back in the Barford pits, apart from refuelling Frankie’s car is left untouched as it seems good but Phoebe’s car is altered a little.

I’m out for my second heat. My start is good and I manage to make some good ground. I’m in fourth place on the last lap but take a chance and hit three cars wide and go through to take the win.

Phoebe and Frankie are out for their final. Frankie starts front row inside of the blues and Phoebe back inside of the superstars. Frankie is off to a flyer and is going really well, Phoebe looks a bit quicker in this one too. Sam Roper is very quick and soon passes Frankie to take the lead. Max is in third place and catching Frankie JJ. He passes but Frankie does his best to stay with him. The flag drops and Frankie finishes in a well deserved third place behind Max and Sam. Phoebe is having her own little battle and finishes in sixth place.

Danny’s out for his second heat, but everything seems to be going wrong for him and once again he doesn’t finish the race.

It’s time for my final. We have left the car all day without alterations as it’s felt good. I manage a terrific start and within less than 2 laps I passed all the Shoot-Out competitors and was at the back of the blues before the waved yellows come out followed by reds.

Feeling a bit miffed I drive round for the re-start. This start didn’t go as well, I didn’t get away the same. I picked my way through the pack and find myself in fourth place as the waved yellows come out. The green drops and I get past the third place man and that’s where I finished.

Sam’s back on the phone to tell me about Phoebe and Frankie’s Grand National results. Frankie drove mint and battled with the superstars to the end finishing in sixth place earning himself the ‘best blue top’ trophy. Phoebe struggled and crosses the line in ninth.

One more race for me to go. Got going well, about 4 laps into the race and Shoot-Out competitor Tom Harris has designs on me hitting the fence. I manage to hold it and bounce off the wires, avoiding the posts and keep going. A few laps later I notice Tom in the same bend not moving. And feel happy to see him there! I cross the line in seventh place.

I managed some decent Shoot-Out points and I’m still ahead for now, that can very easily change though.

Well done to 391, finishing his season on a high! And we wish him well with whatever choices and changes he makes.

I get home at a reasonable time, 7.30, and was just walking the dogs when I hear the mini transporter. Samantha and kids are back just 5 minutes later.

A good weekend – five trophies between us! 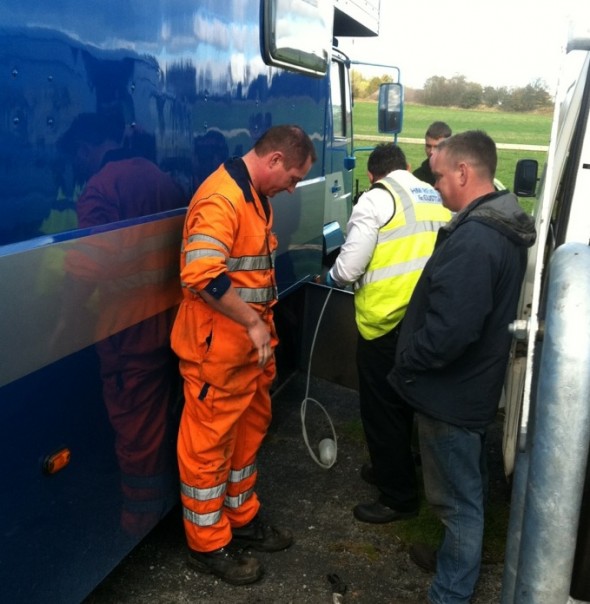 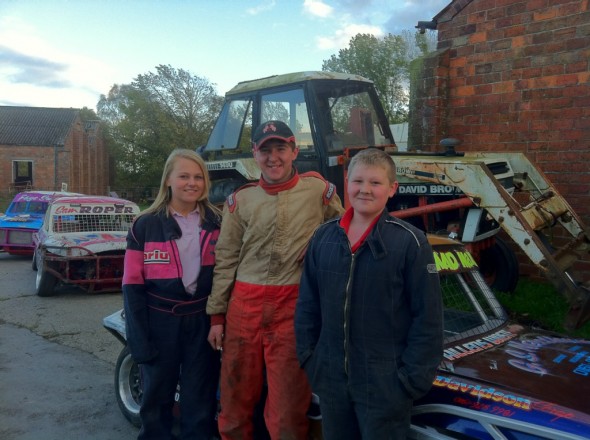 Max, Faye, and Sam, the Top Three in the Northern Championship. 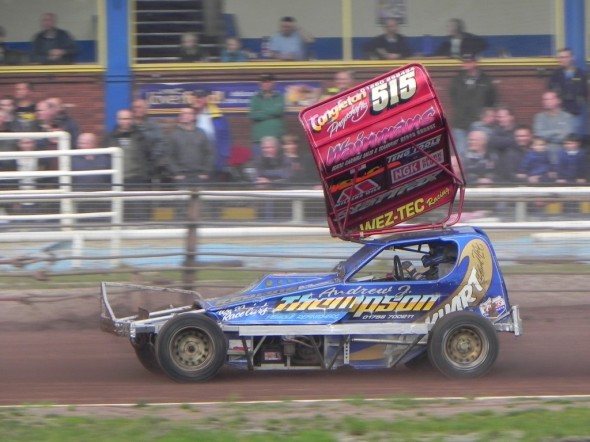 Racing down the home straight in Heat 1. (Photo: Carl Hesketh) 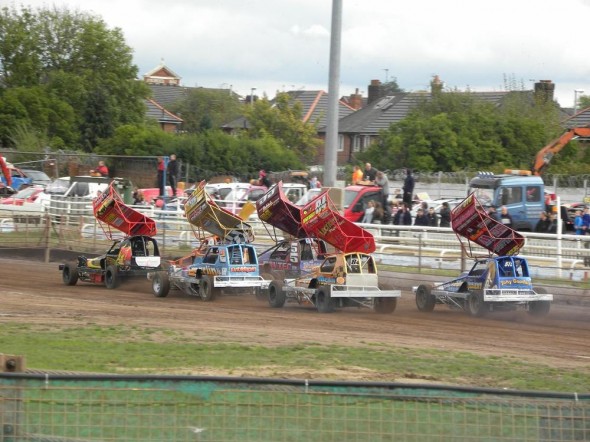 Heat 1, and at the back of the pack (Photo: Martin Fitzgerald) 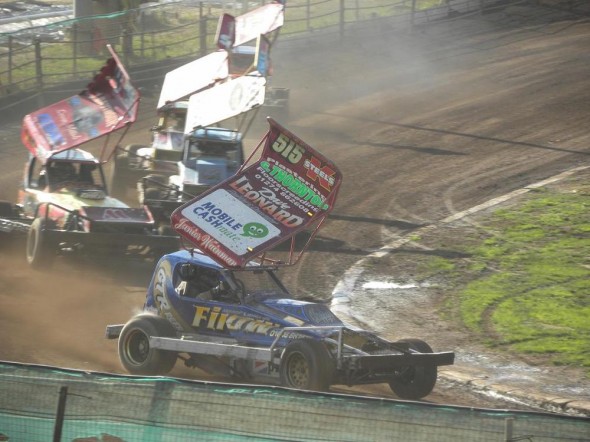 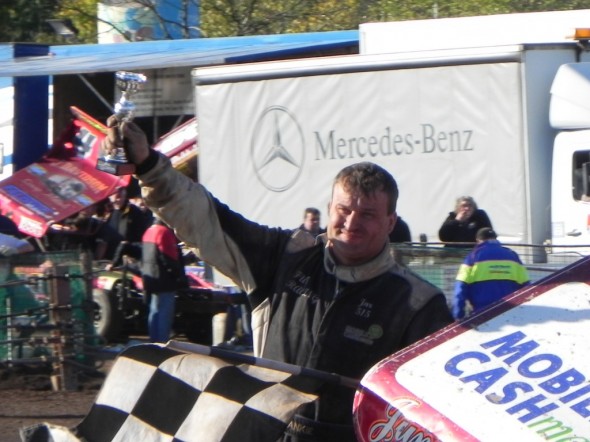 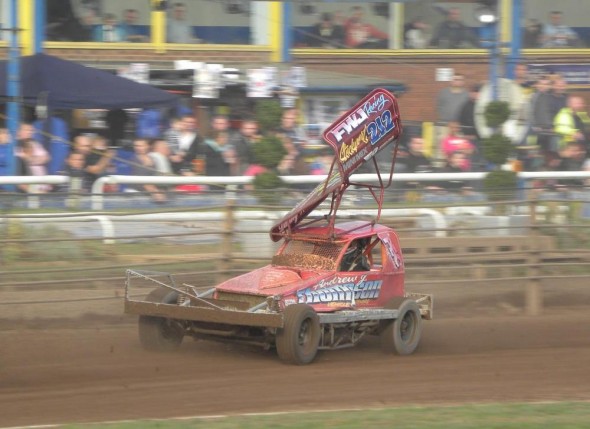 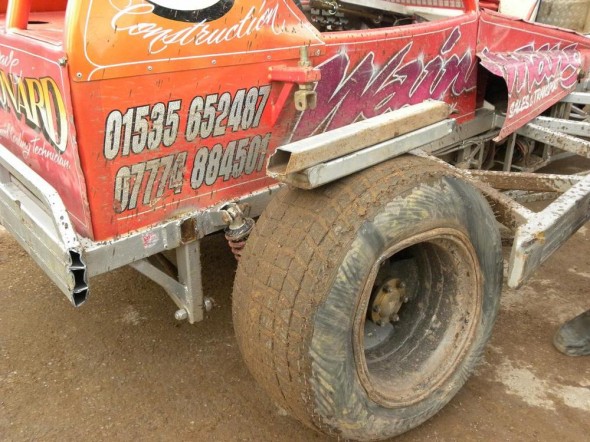 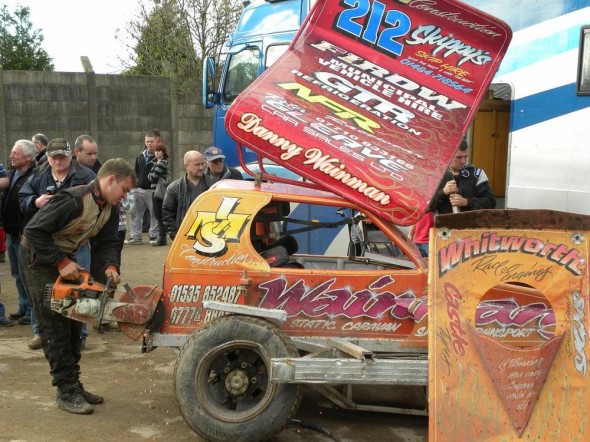 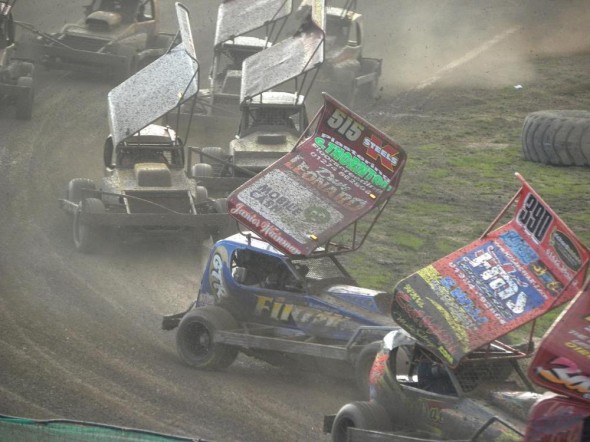 The first start of the Final (Photo: Martin Fitzgerald) 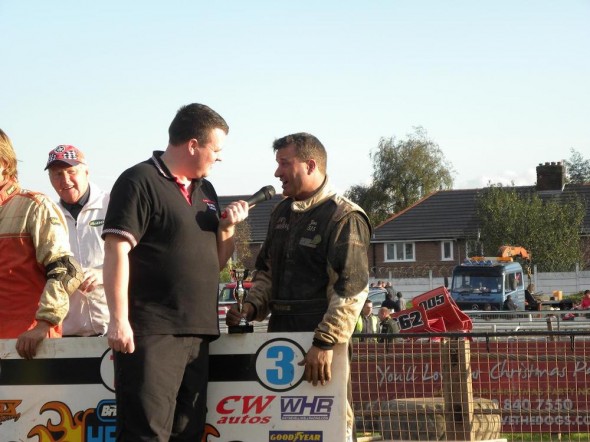 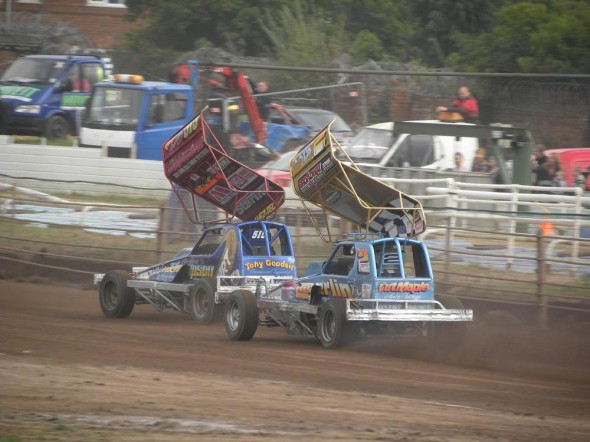 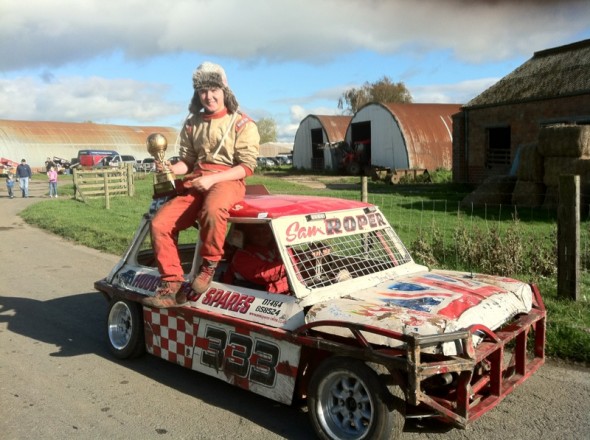 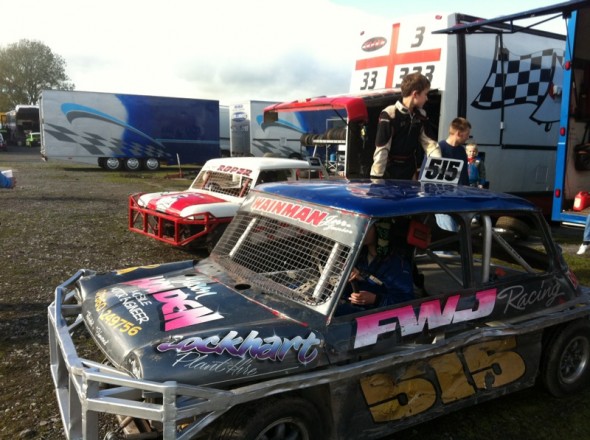 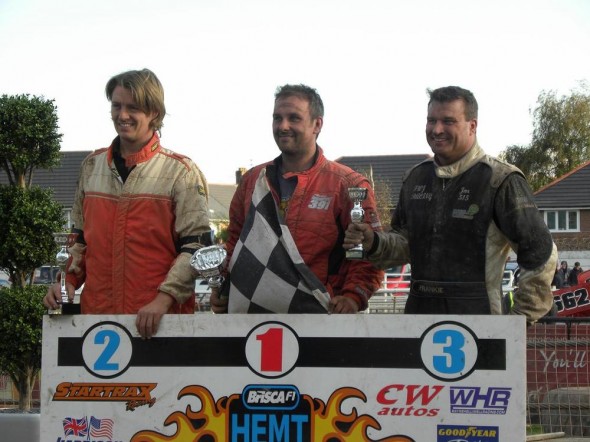 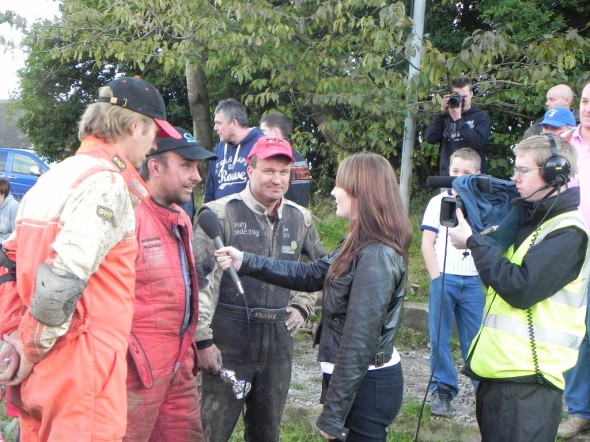 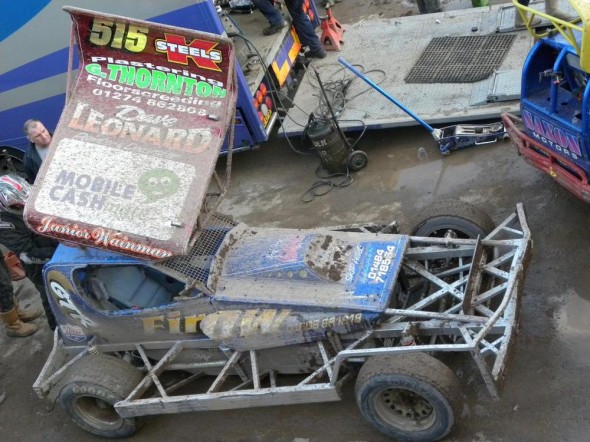 After the meeting. (Photo: Martin Fitzgerald)