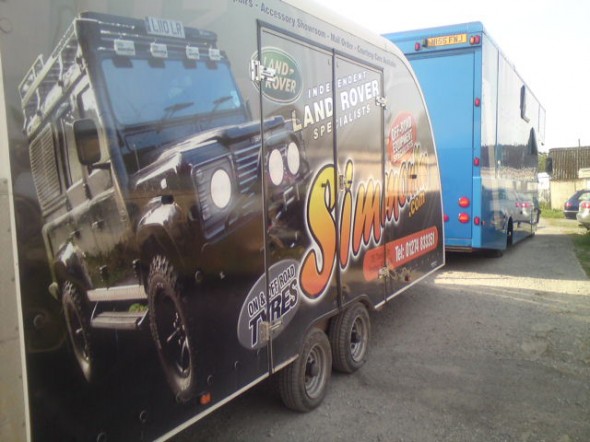 Setting off to Coventry. Big thanks to Mark Calzoni for lending us this trailer. 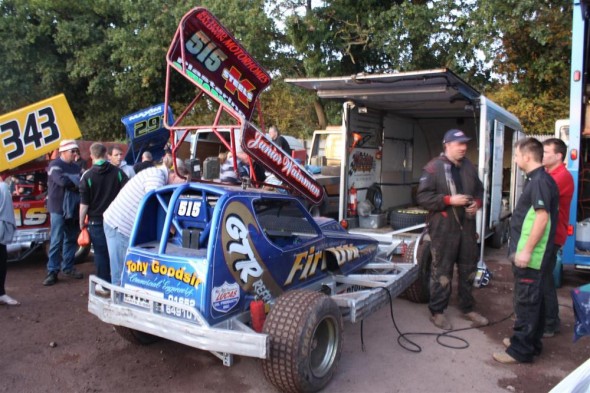 The team chill out before the meeting. (Photo: Mark Hipkiss)

We all had plenty to do before leaving for Coventry, still we managed to get all the jobs done and leave on time. It’s just myself, Phoebe and Frankie JJ racing this evening, as Danny suffered engine problems at Belle Vue and is having the night off.

Without Dan’s F1 to take we can get away with taking the Mini transporter, and we were kindly lent a trailer from Mark Calzoni (Simmonites). Just by taking the mini truck saved us almost £200 in diesel. 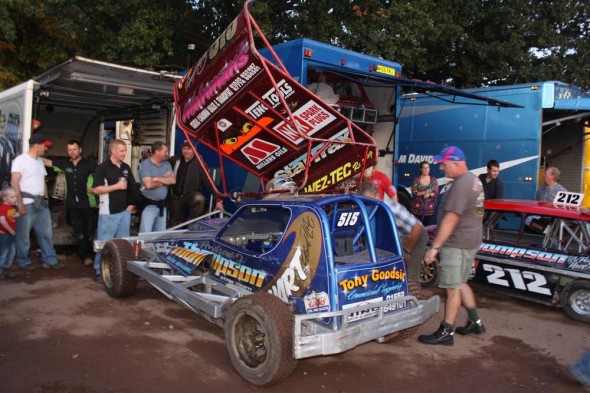 Before the meeting (Photo: Mark Hipkiss) 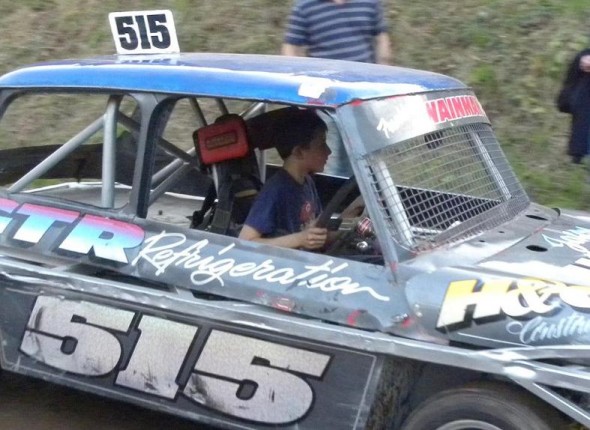 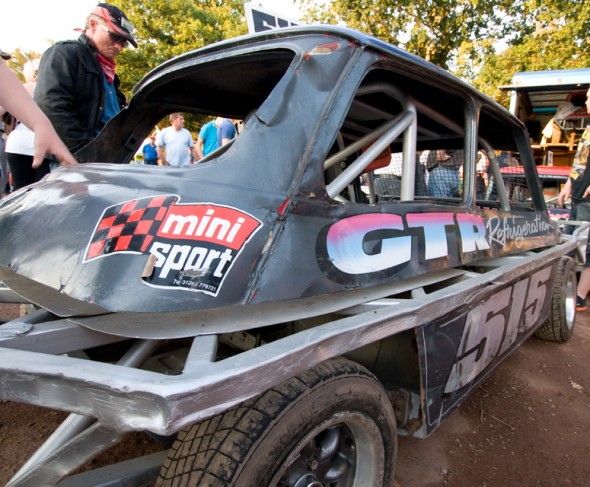 Phoebe is in the first heat and is going mint! Neither Max 777 or Hayley 26 seem to be catching her which is always a good sign as they are both quick. All is going well and she’s managed to get into a decent place before the car just seems to die and she pulls over. It’s not a good sign. Frankie JJ is in this heat too and is going well, he seems to get a bit faster with each lap and crosses the line in ninth place qualifying for the final. 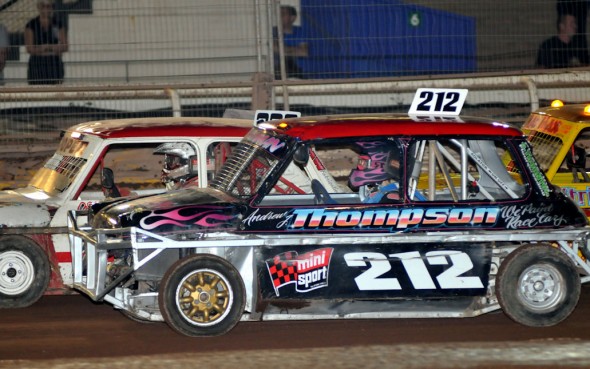 Back in the pits, we find that Phoebe’s engine has blown. At the moment she has one engine between two minis. We were supposed to be fitting this one into her tarmac car for the Mini-Stox British Championship at Buxton tomorrow, so I felt a bit strained on what to do next. Meanwhile, Dan Clifford, Wez and James start to take Phoebe’s engine out in the hope I can borrow one from somewhere.

My heat is fast approaching but I’m all over the place, the mini pits are the other end of ours so I have to act quickly! (I was approached by a couple of young fans for a photo but didn’t have time, sorry guys). Anyway, I think I’ve managed to borrow an engine. Karl Hawkins 276 has offered me his spare so as I’m climbing in my car ready to go out for my heat, Nigel Whalley has kindly delivered Karl’s engine on the front of his F1. 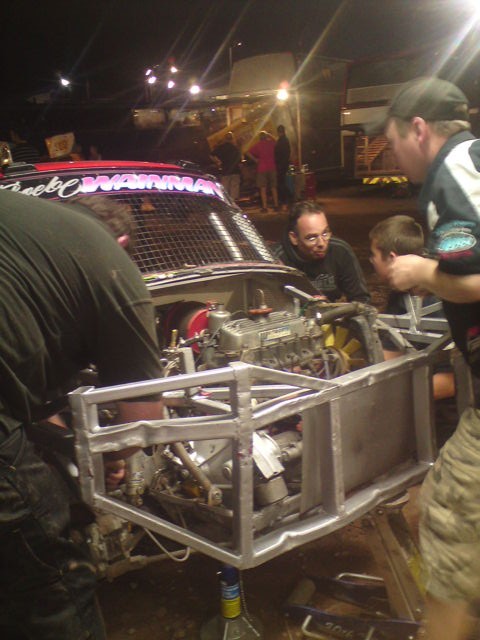 Changing the engine in Phoebe's car. 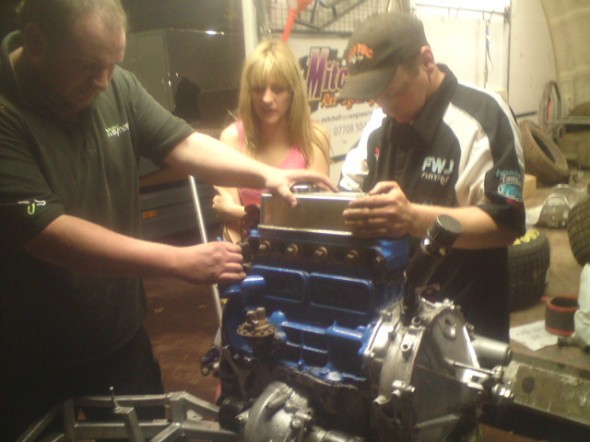 James, Phoebe, and Wez in the middle of the engine change.

Tonight it’s round 4 of the Shoot-out so I’m expecting the racing to be rough again! After altering the back suspension on Tuesday night the car felt great! After just 5 laps I was leading, something I’ve not done in a while! I carried on to take the win and it felt good! 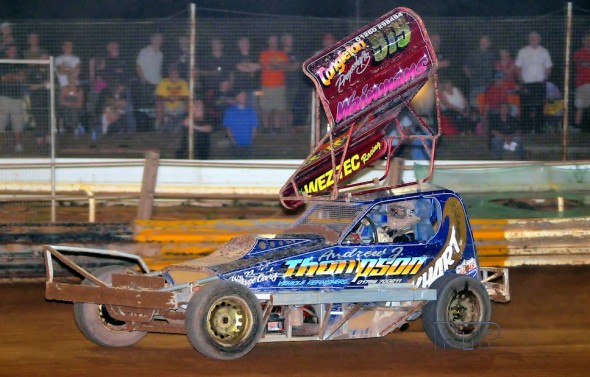 In the pits the team are still rushing to get Karl’s engine into Phoebe’s shale car for the final and Frankie JJ is going out for his second race. He gets a great start and is going really well, he manages to get into third position. But, halfway down the straight whilst going up the inside of car 344 he was turned into and spun. He managed to recover and get going again, still in the places and still driving well. He catches up the 344 car and attempts to overtake on the inside and the same thing happens again. He finishes in 18th place. Never seen Frankie JJ cross before but I had to calm him down after this, he was fuming. 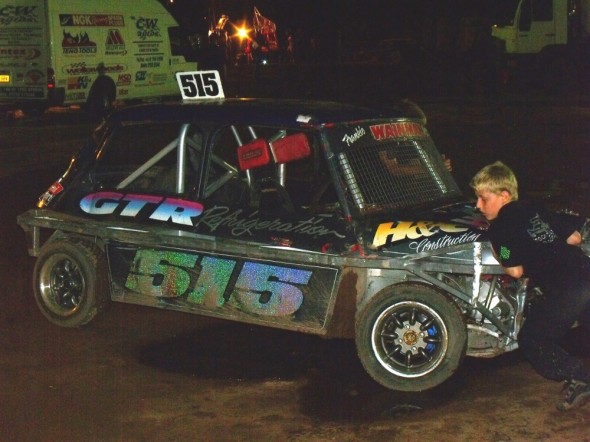 Back in the pits and the crew are doing an awesome job fitting Karl’s engine into Phoebe’s shale car. It fits in without any problems and Phoebe manages to get out for the final. Because she didn’t qualify she starts off the back which is almost where she starts from superstar anyway. Frankie is in the middle of the blues. Phoebe’s start is pretty steady but once she gets going and a bit of confidence kicks in she’s going okay. Frankie is driving pretty well too, he crosses the line seventh followed by Phoebe in eleventh. 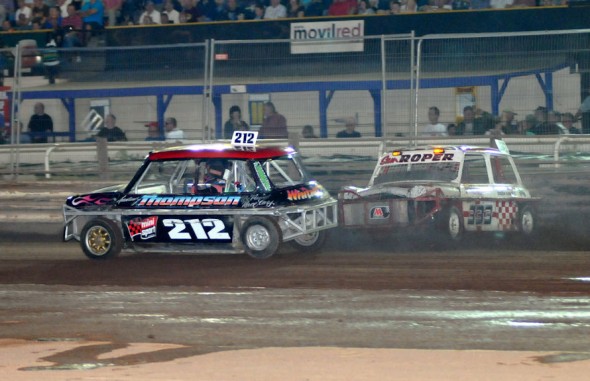 So its F1 final time and it’s a battle all the way. Once again the car feels good and I manage to get up into about eighth place before the waved yellows come out. The race is about to restart but Ryan Harrison, who’s in front of me, has a problem when his car floods up, and as I’m giving him a push start the flags are dropped. The clerk of the course asks for the restart to be aborted but is over-ruled by the steward so the flags carry on with half the field not moving.

Anyway, we all have to carry on and do our best. I’m starting to catch a few back up now and on the last lap tried to get into third spot with a dive on some fellow drivers. It didn’t work and I got fifth place.

Samantha’s going into the Ministox Ladies Race and it’s a frantic rush to get back and make sure she’s ready to go out. Thankfully she’s just in time and goes out on track. The lady drivers names were pulled out of the hat and Sam is on front row outside. She has a good start and looks to be going okay, and then that blooming 344 car strikes again! Same place, same manouvere!

Sam manages to correct her spin and is soon flying back down the straights. Just two laps to go and Sam has a decent lead, until Rebekah Montague hits the bend full noise! The yellows are out and Sam slows down and stops, Rebekah is winded so it’s decided that the race finishes there. So well done Sam for winning, and to Steph Nightingale and Sally Williams for their podiuim places, and to all the ladies that took part. Glad Rebekah was okay, couldn’t really say the same about the car she used though, I think Les Spencer has some work to do! 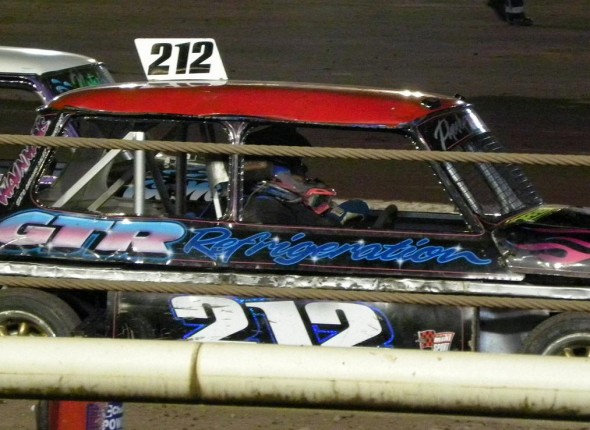 So as Sam’s walking off the track, I’m driving on. Last race of the evening which is a relief as it’s getting late. I manage to get away and keep out of trouble, again the car feels good and is handling well. I’ve managed to get back in the lead and go on to take my second race win of the evening. Not bad for an almost 40 year old!

So a great night for me and Sam, unlucky night for the kids. We load everything up and Mark Calzoni tows my shale car back for me so it’s just the Mini’s for me to take tomorrow. We go to the Pork and Chip shop for supper then make our way to Buxton for tomorrow’s meeting.

A massive thanks to my team and the others for all their help and everything they do; we wouldn’t be racing without them. Thanks to Karl Hawkins and family for letting Phoebe use their engine, and thanks to Mark Calzoni for the use of his trailer and help. Cheers!

PS: As always, big thanks to everyone that sent in photos for the website, sorry we couldn’t use them all! Here’s a few more…. 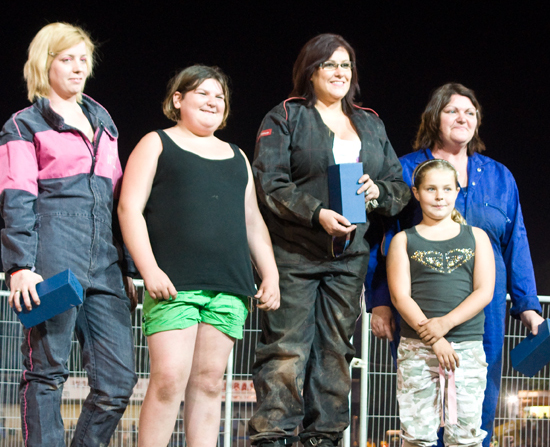 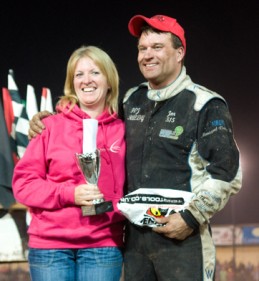 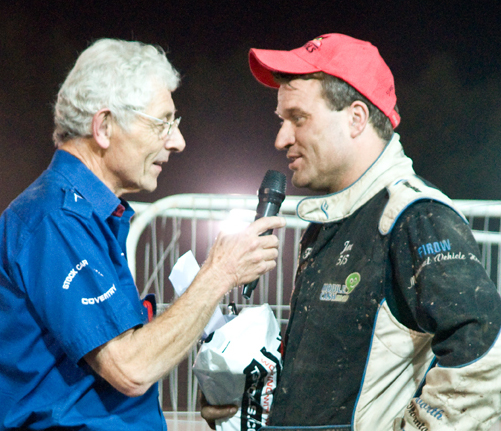 Having a chat with Peter York (Photo: Mike Bottomley) 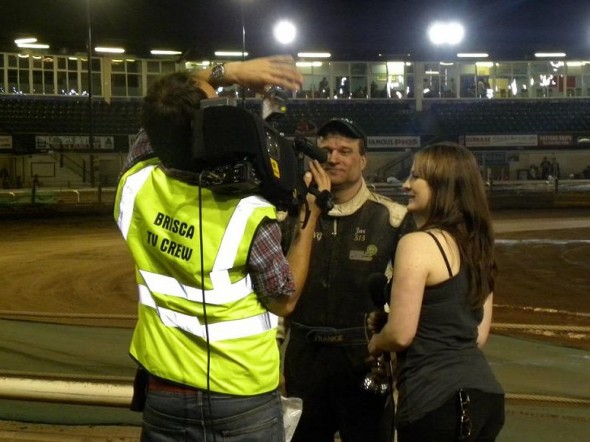 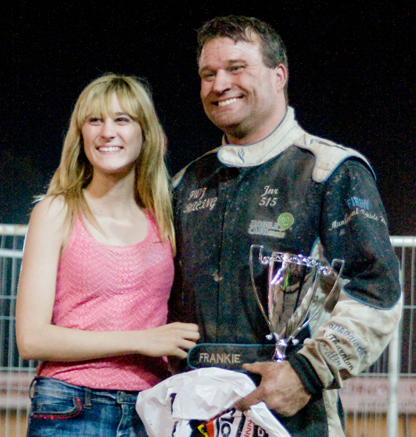 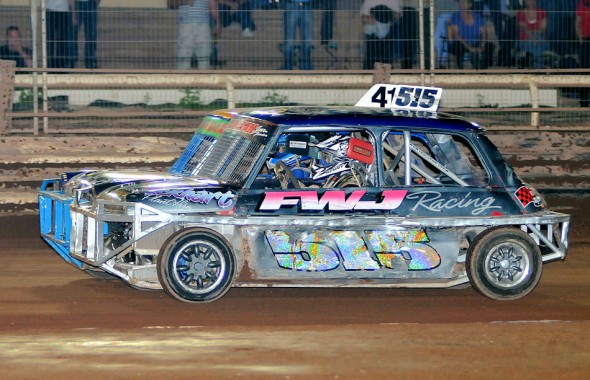