A busy weekend for Team Wainman: Danny’s out racing, plus Phoebe and Frankie JJ are racing tonight. On top of that, I’m transporting Kev Catling’s (266) car who’s racing tonight and tomorrow, and also 447 Dave Hopkins’car, who’s racing at Northampton. This means both transporters are required to get all 6 motors to the tracks! Anyone want my fuel bill?

I want to send Phoebe out for a practice, so pay for her to go out before the meeting gets underway. Last weekend her engine was a bit smoky so I just wanted to make sure everything was okay. So she went out and only did 3 laps before the damn thing blew up! 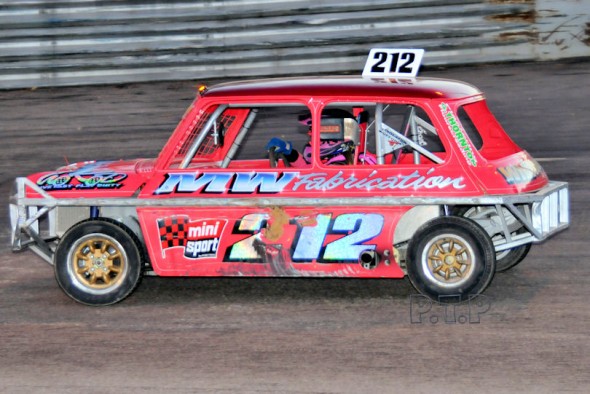 Back in the pits I realise the problem can’t be fixed and feel mega brassed off! I’ve only just had the blinking thing put back together! Phoebe is in tears! She’s running second n the track championship and close to Max, but without tonight’s meeting there will be no way of her winning it. There’s no answer.

That’s until Frankie JJ tells Phoebe that she can use his engine! What a little champ! So that’s it! All hands are on deck to take Frankie’s engine out to put into Phoebe’s car. Phoebe is quite a bit taller than Frankie and can’t fit in his car, so that’s why we have to swap engines instead of her just using his car.

I leave the work in my team’s capable hands and take my car out for practice. 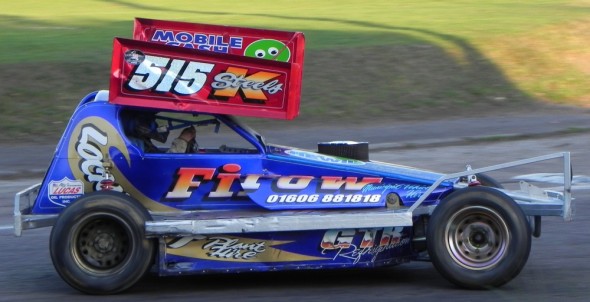 Frankie’s mini engine is put into Phoebe’s car just in the nick of time for her first race at 5.30. Her first few laps seem a little steady but then after that she’s going pretty good! She crosses the line in fifth place. She’s really pleased and reckons that Frankie’s engine is quicker than hers.

It’s time for my heat. The racing at Birmingham has got so quick lately, and with it being round 7 of the Shoot-Out I have to get myself in the right frame of mind knowing that the racing is going to be rough and it’s likely that I could get knocked about and hurt. The race goes pretty smoothly though and after trying my best manage third place. 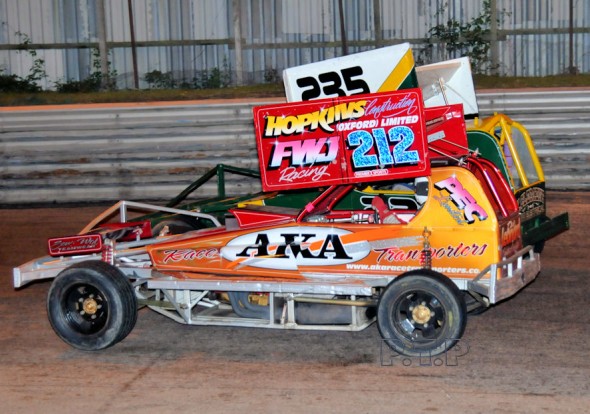 Danny was on the pace (Photo: Paul Tully)

Phoebe’s out now for the Golden Helmet race, but not much to write about. She does 1 lap and pulls off. She explained that she thought she had heard a rattle in the engine and panicked so pulled off just in case. After having a look we don’t find anything wrong so she’s still okay to go out for the national. 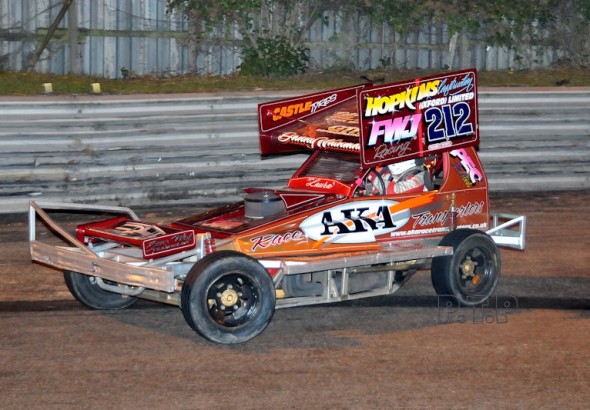 Me and Sam have a wander down the hill to go and watch Danny in his heat and to see how new driver Kev gets on. Danny looks really quick and is driving mint! He makes his way through the traffic and finds himself in the lead. Suddenly, right in front of us Kev hits the Armco hard and bounces round the bend without slowing down. Tony Smith has retired from the race and is sat in that corner, Kev runs straight into the back of Tony really hard and the waved yellows are bought out immediately.

My first thought was that Kev’s throttle had stuck on. I went onto the track to see if he and Tony were okay. Both were a bit shaken up and winded, only to be expected really. It took approx half an hour to cut Tony out of his car. Kev is out but complains about his left foot hurting.

He explained that when he got hit wide coming into the corner his foot clipped the accelerator and got stuck under the brake so was unable to slow down or stop until he hit Tony. 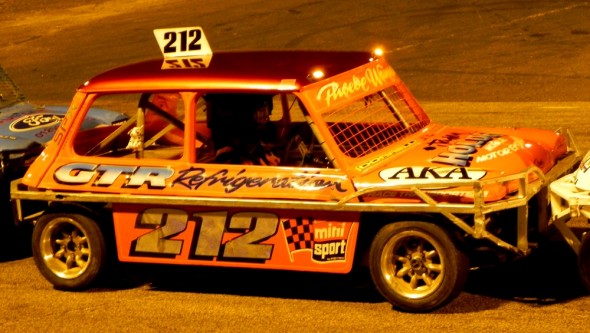 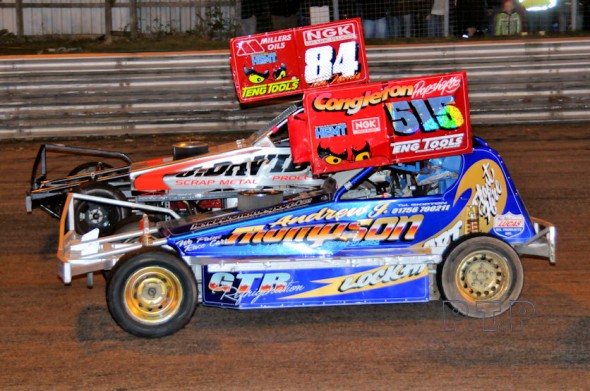 Back to Dan’s race, there’s just 2 laps left and Dan is in the lead and 390 behind him. The flag drops and Stuart hits Dan and passes, Daniel returns the hit on the following lap and manages to pull enough ground to stop Stuart getting back on him, and Danny takes the win!

It’s the F1 final. My car felt crap! Seemed to be getting left behind by everyone! Me and Tom Harris spent the last few laps battling for 13th & 14th? Danny got taken out and received damage to his roll cage. 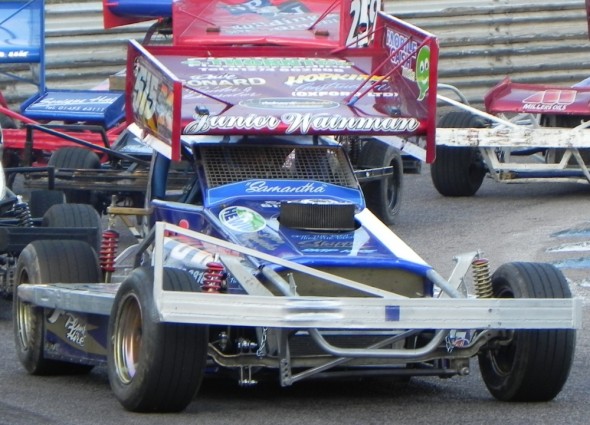 Phoebe’s back out for the national. Birmingham seems a good track for the lower graders to get away and they take some catching from the back! She she’s driving really well and moves into second place where she finishes behind Brad Stirk. She’s back in the points and only 4 behind Max, 1 more Birmingham to go, can she do it?

It’s been a long night! Finally I go out for the National. Dan has decided not to as he wouldn’t have time to weld his car up. My car feels a bit quicker but I’m still struggling, still I manage to up into seventh place. Just a few laps remaining, then I was caught and spun by Mick Sworder.

A poor night, really. Back in the pits I remove the rocker cover and discover the cam follower and push rod has broken, so no racing this one tomorrow. That’s when Dan comes to my aid! He has offered me the use of his car for Northampton!

Everything loaded and we leave the track at 11.35. Destination Northampton.

I’m sure Tony Smith will be feeling a bit battered this week, so all the best to him. Sadly Kev Catling’s injuries were nasty; he suffered 3 broken vertebrae and 5 broken bones in his foot. We wish him a speedy recovery.

As always, big thanks to everyone who sends in pictures to the website, it is very much appreciated by all of us.
The ones below are from Martin Fitzgerald – cheers Mart! 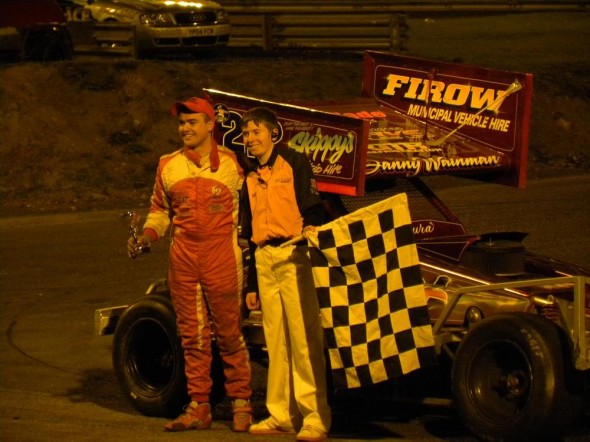 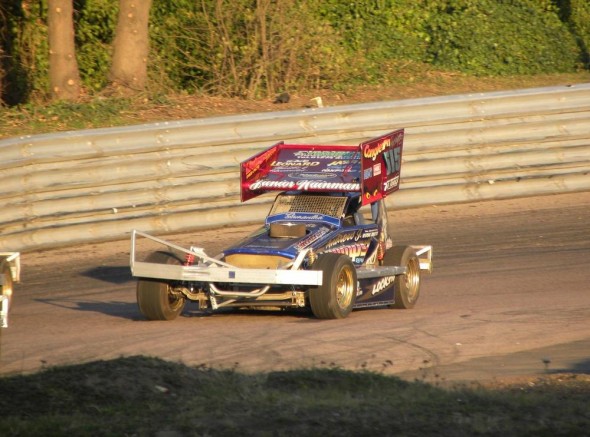 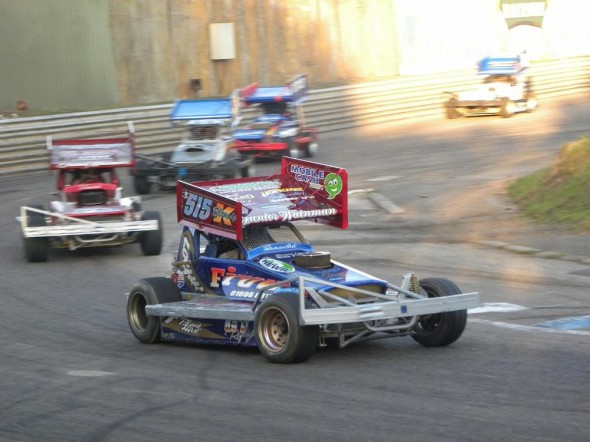 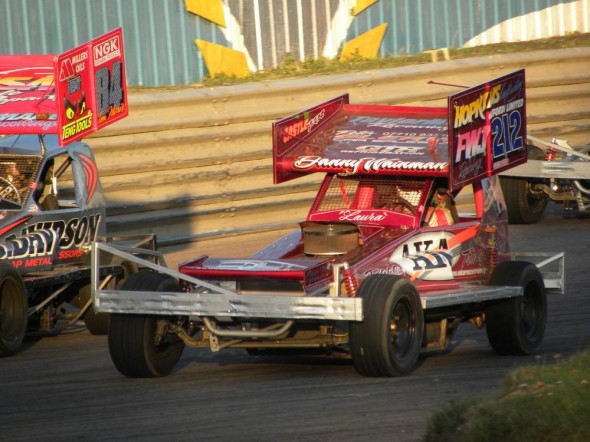 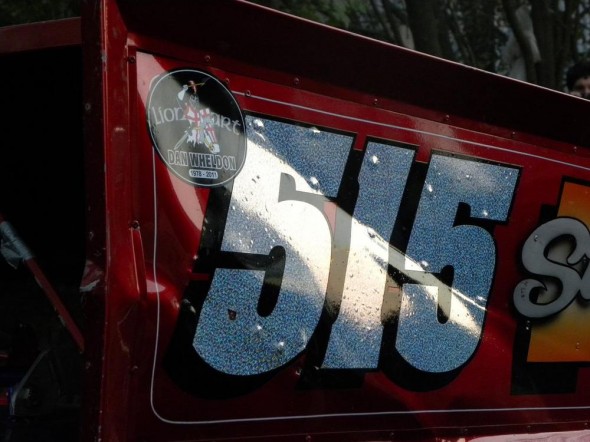