We arrive at Belle Vue on time. It’s already busy and Phoebe and Frankie JJ are on almost as soon as we arrive.

It’s been raining and the track surface looks a bit sloppy! Phoebe is in races 1 & 2 and Frankie JJ in 2 & 3. Phoebe didn’t have any time to put wet tyres on so went out as she was. She starts well but the drivers behind are soon starting to catch her. It looks like she’s struggling a bit and goes over the line in 6th place.

Heat 2 is on shortly afterwards, they’re both in this one. Both have changed their tyres so hopefully will get more grip. Both had a good start and are picking their way through the pack. Phoebe has a bit of an edge on Frankie and she takes the lead. Bradley Harrison has passed Frankie into second place but Frankie soon retakes hi second spot and passes Bradley back, and soon starts to gain some ground on his sister Phoebe. The last 2 laps were quite exciting to watch for us, Phoebe’s roll offs had run out and she went to wide, Frankie gets on the inside of her and passes her to take his first win on shale!

Both on the podium – we are thrilled!! We must give a mention to third place driver Billy Robinson (249). His first podium finish and he spent it driving Frankie and Phoebe round, missing out on his lap of honour! 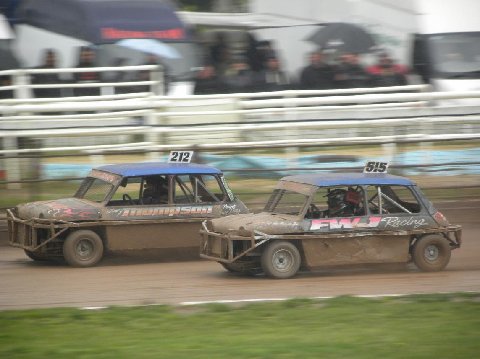 Last lap and approaching the last bend, Frankie JJ about to challenge Phoebe for the lead. (Photo: Martin Fitzgerald) 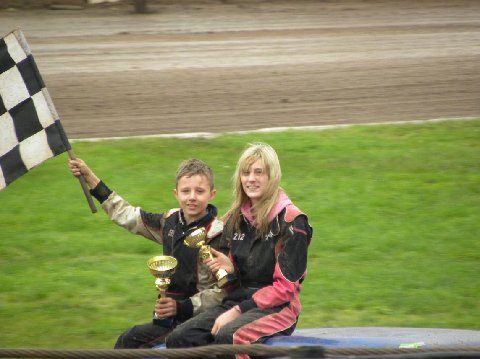 It’s time for my first heat. I decided to experiment with a different Rally tyre, which wasn’t very good. Me and Andy 391 went over the line neck and neck but I just got it and finished in 5th place.

Next is Danny’s Semi Final and I’m really glad ours has been and gone! Danny seems fine as he gets ready to go out, but his mum Alison is feeling nervous though! During the beginning of the race Dan’s car got climbed over and he was almost a lap down before the waved yellows come out. There’s a lot of cars on the infield at this point and Dan managed to get untangled and rejoin the back of the pack. It was just a case of keeping everything crossed now that he didn’t get a flat tyre or any other problem. Thankfully his car did the job and he managed to finish in seventh place. Not bad after the start he had! Congratulations go to Paul ‘DA’ Hines on his excellent drive to win the Semi! 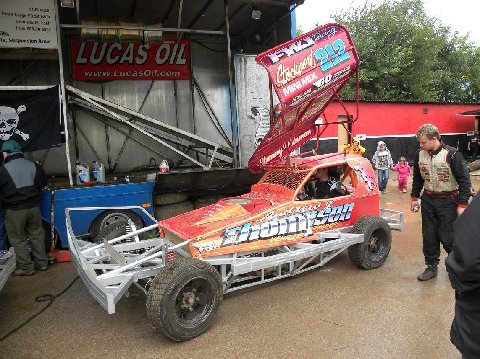 Ministox are back out for heat 3. Just Frankie JJ in this one who’s still grinning about his result!
Things didn’t go quite as smooth for him in this race, once or twice he went wide onto the wet stuff which held him back, still he managed a 5th place which is good.

Next on is the F1 final. The racing is eventful! Lots happening, I manage to get into 5th place before my front wheel gets hit and the stub end collapses, still I battle on and get 10th place behind Daniel who gets 8th.

Minis are back on for their final. Phoebe gets a decent start but spins in the corner and is collected, her exhaust falls off she retires to the centre. Frankie JJ is going ok, like before he gets slowed down by going too wide trying to avoid other drivers. He manages to finish in 8th place. 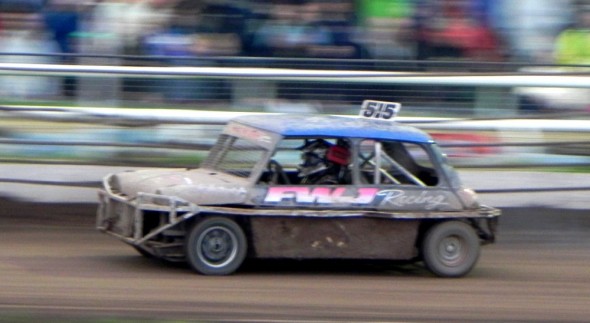 Frankie JJ at speed in the Final (Photo: Carl Hesketh)

F1 Grand National off we go again! I seem to be making good ground and the car feels quick, once again lots happening around me. I’ve got into second place and can see Dan Johnson in front. On the last bend I take my chances and dive for Dan, it pays off and I take the win. It’s the Wilf Blundell trophy which I have won twice before and it feels good to get it back!

So a successful weekend! Feel really proud of the kids for their efforts! Proud of Dan for getting back up to seventh after his disastrous start in his Semi. And feeling pretty good about holding that chequered flag once again!

Finally, a big thank you to Dan Clifford and Tom Boyer for all their help over the weekend.

A special mention for these fans that came to see us:- 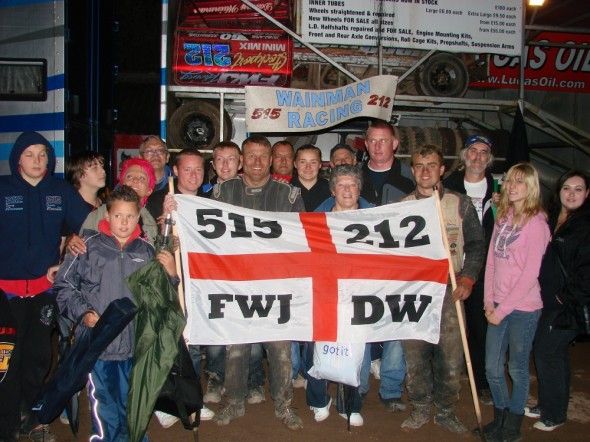 And a few more photos from the meeting… thanks again to everyone who sends them in. 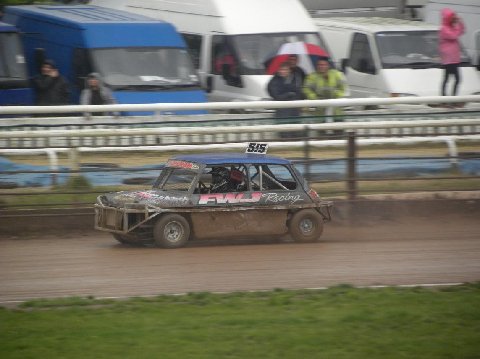 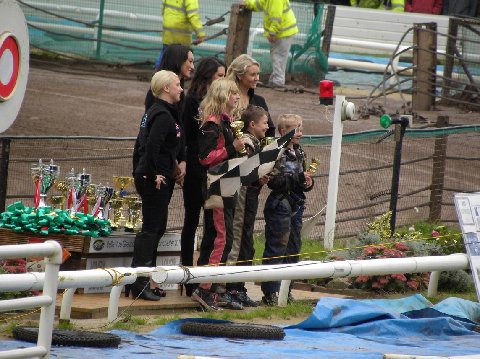 Frankie JJ on the podium after his first win on shale (Photo: Martin Fitzgerald) 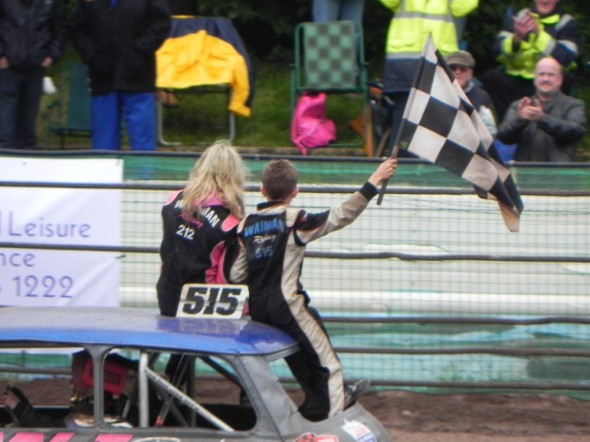 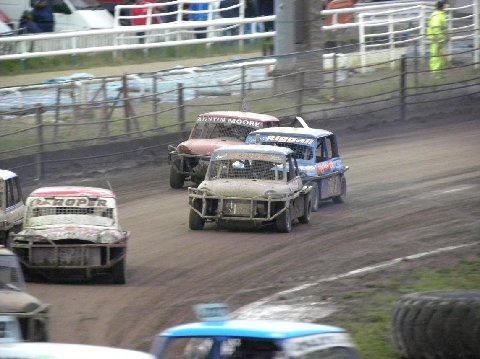 Frankie JJ in action in the Final (Photo: Martin Fitzgerald) 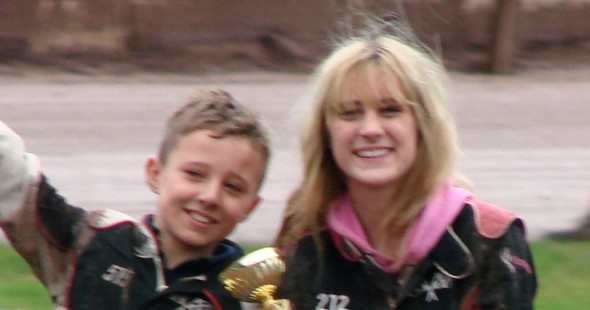 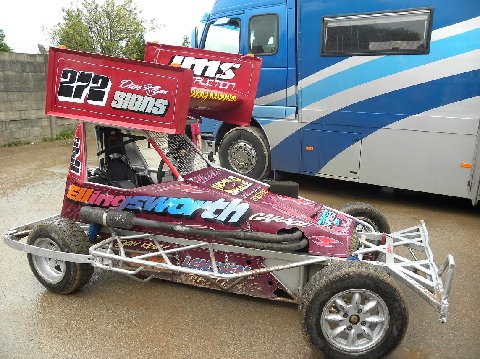 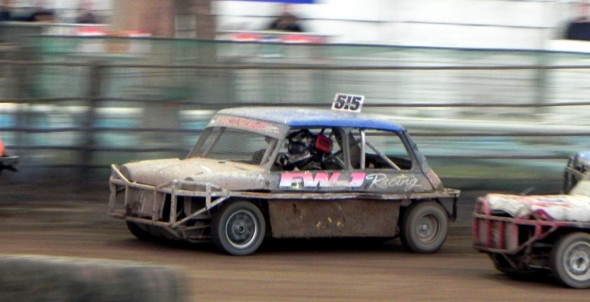 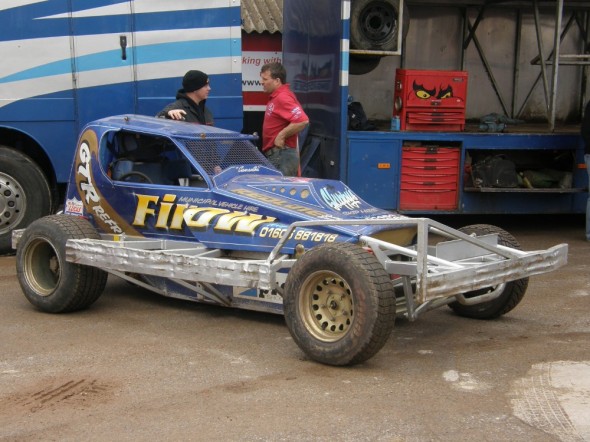 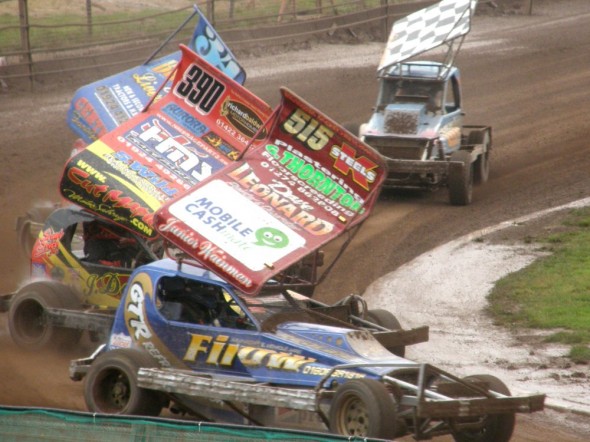