On Wednesday night, we spent all night loading up the Mini Truck ready for the Isle Of Man, taking four minis in total: Phoebe’s, Frankie’s , Sam Jacklin’s, and Cammy Dorrell’s. Three of them fit into the truck and we tow the other one.

Thursday morning and everything’s going well until we get a blow out on the Mini Truck! I have to take it through to Castle Tyres for a quick repair, so we end up setting off a bit later than hoped.

We need to catch the ferry in Heysham for 1.30 but the satnav’s arrival times says 1.50. Traffic is a nightmare but always is when we’re late. Anyway we arrive just as back door of ferry is lifting! Not Happy!

The next crossing is not until 2.15 early hours of Friday morning. After some thought we decide that the truck and family will have a day in Morecambe, and as my road car is there I will drive back to the farm to work on my tar car for the Semi.

This is where things got tricky! I’m told that the Ferry doesn’t sail back to Heysham Saturday morning (where my road car is) but to Liverpool. So what now? Thankfully, friend and sponsor Mike Morris lives in Liverpool, so instead of me driving back to Heysham where the truck and family are, I drive to Mike’s. He and his good wife then drive me 90 minutes to Heysham where I’m reunited with the family! Confused?

Anyway we turn up at the campsite 6.00am and sleep until 9.30. It’s good to see the mini gang, and we spend an hour or so chatting about our ‘missing ferry’ experience. 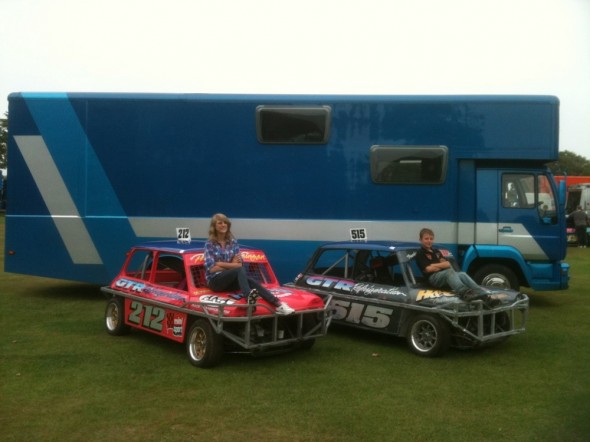 Phoebe and Frankie JJ posing in The Isle Of Man (Photo: Sam Wainman)

Later that afternoon we take kids to track for a practice run. After just a few laps Phoebe’s car sounded rough. So we tinkered about with it several times but the rattling got worse. I’m so disappointed as due to my Semi tomorrow I will not be here for any problems.

The good news is that Wednesday night when we were loading up, I decided to put in Phoebe’s engine out of her shale car. So back to camp and it’s engine change time! Thanks to everyone who helped me out, especially ex-Ministock driver Dan Clifford, who is a brilliant engineer and a credit to his parents! All I can do now is hope there are no problems tomorrow when I’m not here!

Early Saturday morning I have a ferry to catch. Steve Roper has kindly agreed to take me to the docks at 7.00am, and I arrive at Liverpool at 10.30. Mike Morris is there waiting for me and takes me back to his shop where my car is. Have a quick coffee and a look at the satnav, 186 miles to Skegness! 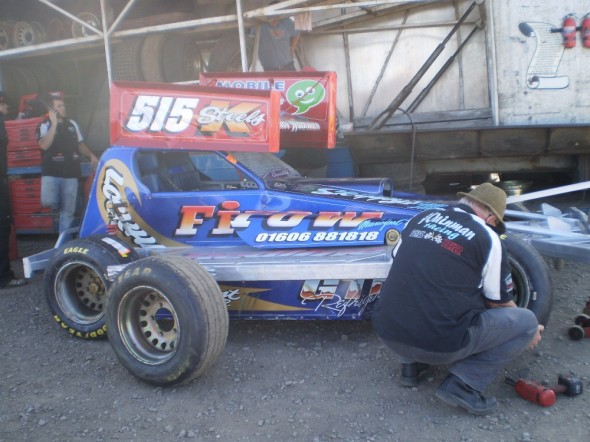 I arrived at Skegness at 2.30. Already a great atmosphere in the pits and very busy. Meanwhile, the kids have started their meeting in the Isle of Man. Sam informs me that during Phoebe’s first race she was spun out bending her steering arm. It was a rush to get her out for next heat but with lots of help from Wez and Ministox driver Karl Hawkins (275), Phoebe managed to get back out just in time. 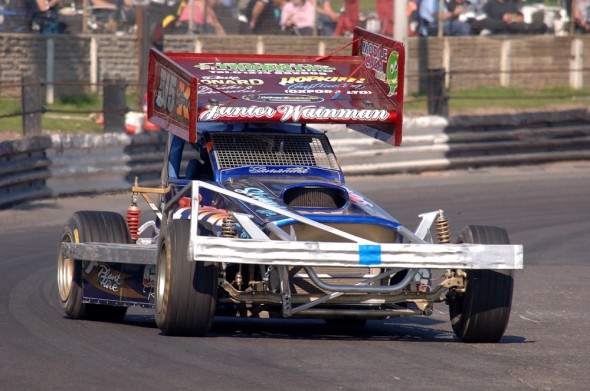 Heat 2 and its Frankie JJ’s turn. Sam tells me he was going really well until he got taken onto the infield where he hit a big tyre and got some height! He manages to rejoin the race though but doesn’t get a place. Phoebe was going okay and got eighth. 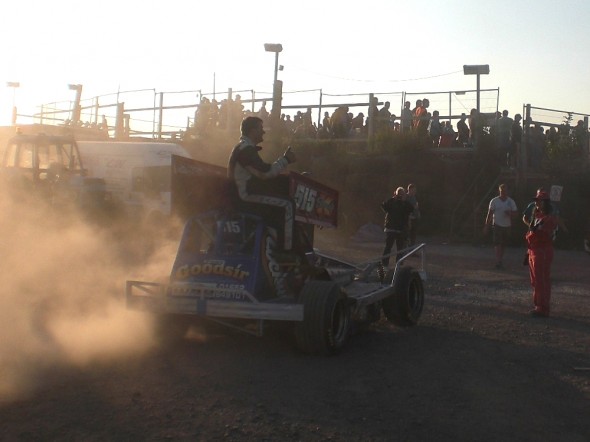 Frankie on his way to the Semi-Final (Photo: Adrian Smith)

So now it’s my turn! We are called for our parade lap which they do in reverse order, so I’m last on. Pleased with the amount of cheers I receive, a few Boos too but only to be expected.

So after crawling around for our rolling lap the flag drops, and I take the brunt of a big hit, which I was expecting. I managed to keep the car under control and get away, I look in mirror and not much behind me, good stuff!

Then I noticed that my front bumper is not looking very healthy! The waved yellows are out and Paul Harrison (2) lines up behind me followed by Michael Scriven (12) and then Andy Smith. I managed to get a good restart as did Paul, we are both on the same pace and we started to race each other, swapping places. I have to be careful as my front bumper is in no fit state for giving any big hits. 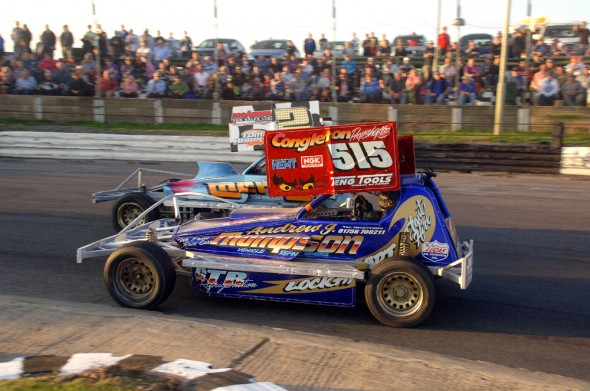 I then notice that 12 & 391 are catching and with just a few more laps to go I couldn’t afford to do anything stupid, and besides, second row in the World Final is okay with me. So there it is, top three, 2, 515, 12. I’m pretty chuffed it’s over and that I got a good position.

Straight after the presentations I’m on the phone to Sam to see how the kids are doing. Not the best of news, Frankie’s engine sounds sick. I advised Frankie JJ to go back out in his next heat but to keep an eye on the temperature and that if it got hot to pull off. Thankfully it didn’t get hot and he went well and got a place. A bit more investigating and Wez and Vicki discovered that the pulley was loose, a problem that I would be able to fix for Monday.

In the Skegness pits the team were working hard straightening my front axle and welding up front bumper. I went out for the final which was a hard race with plenty of action, and I managed fourth place.

I was unable to go out for the Grand National as I had a 4hour drive back to Heysham to catch the 2.15 Ferry and there was no way I was going to miss another crossing! 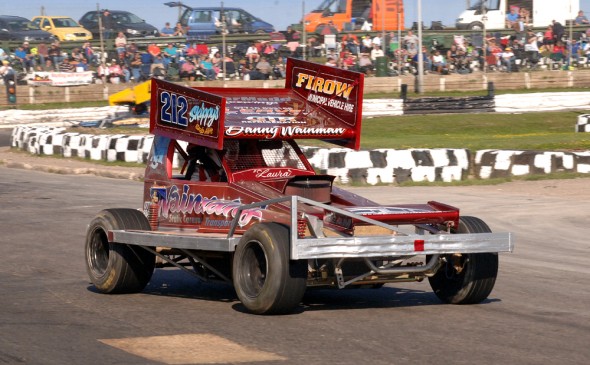 I arrived in the Isle Of Man at 6.00am Sunday morning. The camp is very quiet so I decide to get my head down for a few hours. After a sleep it’s time for some ‘Mini Maintainence’. We checked Phoebe’s car and made a few alterations then I work on Frankie JJ’s car sorting out the pulley. Before I know it the afternoon has passed, Sam has made Spag Bol, and Steve Jacklin is strumming away on his guitar around the camp fire! Name that tune? Managed a reasonably early night.

Monday morning arrives and we have all day to do as we please as the meeting doesn’t start until 7.45. I do something I have never done before. Under the careful eye of Samantha I make bacon sandwiches, didn’t know I had it in me, and felt quite smug when everyone said they were nice.

About 20 of the Ministox kids catch a bus to the track as during the day they have karts there. Phoebe manages to get herself banned for putting 2 boys through the tyres. Meanwhile a few of us go into town to play some pool and have some lunch, and then it’s time to go racing.

Sam seems to think that the kids are more confident when I’m there with them; I suppose it’s a reassurance thing. Frankie is in heat 1 and manages a good drive and gets stuck in on last bend for 6th place. No damage occurred so that was good.

They are both in heat 2, Phoebe looks fairly quick, she has a decent race with the Roper Brothers, Sam & Simon and picks up a decent 4th place, followed closely by her younger brother who finished in 5th. 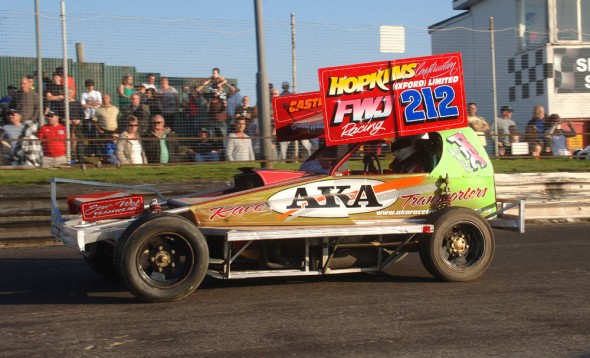 Danny shows off the stunning paintwork on his refurbished car (Photo: Colin Casserley)

Once again no damage so just the cars to refuel. Phoebe goes out for her second heat and looks to be going very well, keeping up with the Roper Boys and having a good race with Mad Max. It’s a battle to the end, Phoebe and Max go over the line neck and neck but Phoebe just pipped him at the post by a few inches into third place.

Before the Ministox final I had agreed to do a demo in Aaron Blundell’s F2. I started one side and F1 driver Ian Venables (60) started at the other. We just did 8 laps, which made me realise that my neck was pretty sore after my Semi. I thought the F2 was pushing on a lot which is what Aaron thought too. Thanks go to them for giving me the opportunity.

Next, the Ministox final. Both Phoebe and Frankie are in this, both get a decent start, but Frankie got put out and ‘T-boned’. Phoebe was holding her own and had a good race finishing fifth.

So good meeting was had by all, and a good time altogether in the Isle Of Man. Looking forward to our trip back next year, just hope it doesn’t clash with my semi! Left the island at 7.30 Tuesday morning and got back to the farm at 2.30pm.

Thank you to the following people for help in the Isle Of Man:
Mike Morris
Steve Roper
Dan Clifford
Wez and Vicki
Karl Hawkins
Ray Williams