Earlier start than usual for us. We left farm at 10.00 because I wanted the kids to have a trial run at Buxton before their gold roof race on Sunday. Phoebe had never been to Buxton in this car before and Frankie has recently has engine trouble, so for my own piece of mind I wanted them to have a go round to make sure there were no problems on the day.

In practice Frankie JJ looked really quick so we decided to load him up and save the car for Sunday. Phoebe didn’t seem her usual self. I sent her back out and told her to follow a faster car. She latched on to Simon Roper who looked really quick and managed to keep with him, so we were all happy. Loaded up and set off for Coventry. 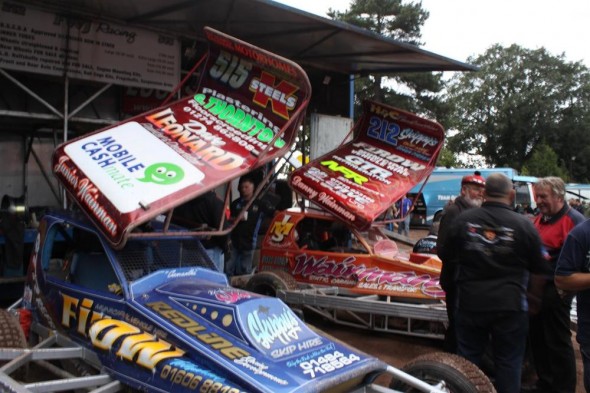 The big truck was already there when we arrived. I’m in the 2nd heat and all was going well until I hit a car that had spun so by the time I had straightened up I was almost a lap down. A few laps later my front tyre went flat and the shocker was off, still I kept going and managed to finish in 9th place.

Danny was in heat 3, I thought he drove really well and got a well deserved 4th position. 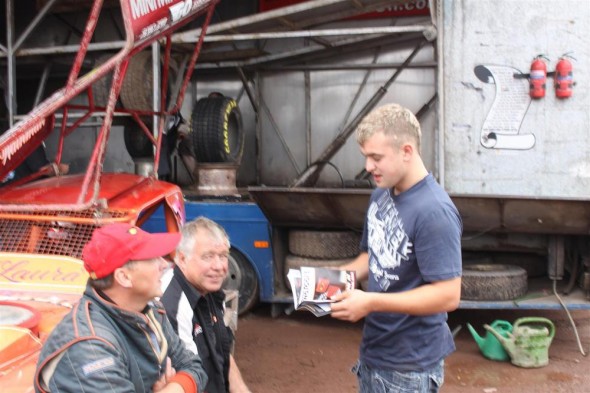 So we’d both qualified for the final and it was time to go on track. I started on the second row from the back and it was hard work and chaos all the way! I had managed to get into sixth place, then with 5 laps to go the waved yellows came out. Today this didn’t work to my advantage! I was overtaken and put out into the soggy stuff before the flag had dropped. Once I got back on line I got cleaned out by a white top and broke my half shaft. Not being one to give up easily I limped accross the line in 12th spot.

Danny was also having a rough ride. He got snotted into a parked car and did his back wheel and half shaft.

Just the Grand National to go! Mine and Danny’s cars are fixed by our hard working crew and out we go. Danny was still having problems and was circling for a while, it kept cutting out and after a couple of false starts he parked up on the infield.

So Danny was out, just me remaining. This turned out to be my most hassle free race of the evening! We had made a few alterations to the car after the final and it felt loads better. At last a decent place – 3rd!

After the racing was over and everything was loaded, we joined Laura Reedman for her 18th Birthday Party held in Coventry restaurant. I took our Big Truck back to the Travel Lodge for Dad and Thornie so they could enjoy a tipple or two. The party was really good and went on rather late! We didn’t stay to the end as I was driving the mini truck to Buxton. We arrived at Buxton track at 3.00am. I’m feeling pretty knackered but at least we’re here now and I can get some sleep!