A mixture of sunshine and showers on the way to Barford. Frankie JJ, like me loves wet tarmac and mentions that he’s going to put his shale tyres on when we get there. As it turns out Frankie JJ didn’t need to put shale tyres on as it remained fine.

Approx 30 Minis turn up, this is the penultimate qualifier so all ministox drivers want to make the most of grabbing some valuable points. 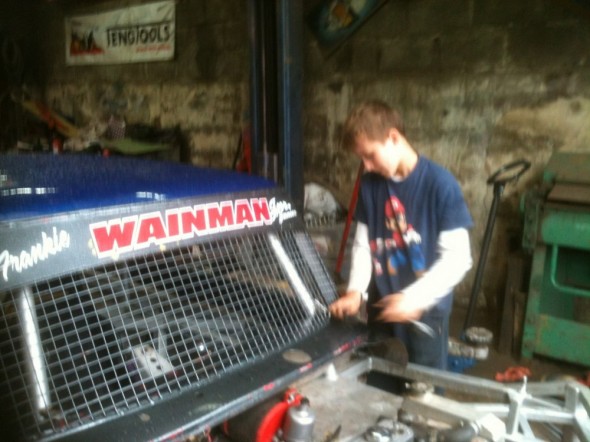 Frankie JJ working on his car prior to Barford.

We notice during practice that Phoebe has a really good line and is throwing it into the pits bend without showing any fear, she looks pretty quick too! Frankie on the other hand looks like he’s struggling a little.

Phoebe is in the first heat. She gets a good start and before we know it has taken the lead, things are looking good for a win for a while. She leads for 8 laps but on the last lap she catches a novice and loses a bit of time passing, in the meantime ‘Mad Max’ 777 is catching and goes for a last bender, spinning Phoebe for the win. Phoebe managed to recover into 4th place.

Both Phoebe and Frankie JJ in heat 2. This start was a lot better, as there was more space between the grades. Phoebe gets off to a flyer! She makes the opportunity to go for any gap available and passes 8 cars to take the lead. She looks even quicker and more confident in this one than she did in the first! 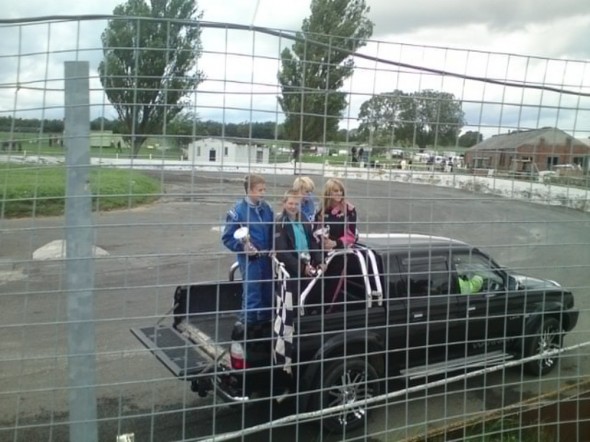 A few cars have passed Frankie JJ but he’s having a real good race with Simon Roper, where they both race cleanly exchanging places to the end. He finishes in 10th place just behind Simon. Phoebe however takes her first ever win at Barford (a track that she has never liked) The smile on her face says it all and of course Mum and Dad are thrilled too!

Just JJ in the 3rd heat. A bit of a sluggish start, he gets spun on the first turn, hits the sleeping policeman and rips the front wheel in half! So a bit of a non starter, Frankie can do nothing but watch the others race sat in his car. 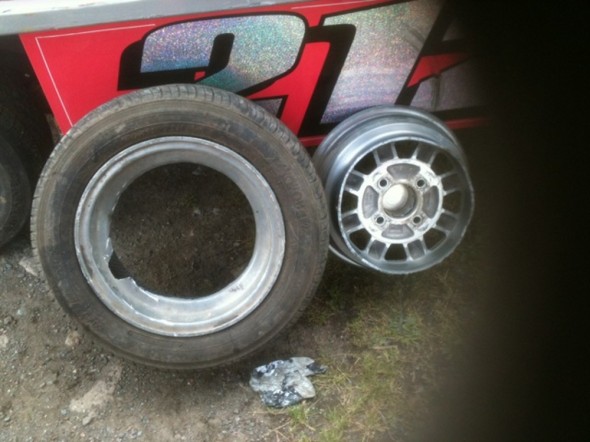 Frankie's front wheel ripped in half.

So now it’s final time. Phoebe goes to line up with no problems but Frankie’s car will not start. It sounds like a fuel problem. We try various things but it’s no good, the track staff kindly hold the gate for him to join the others but we didn’t have enough time. It turned out that the 515 mini had crushed a fuel pipe. Probably when he took off going over the sleeping policeman?

Once again Phoebe is flying and is a joy to watch! She makes her way up into second place, and is slowly catching race leader Austen Thompson, but he’s flying too! Phoebe finishes in second place, maybe just 1 more lap?

But anyway we can see her beaming away from the other end of track so she’s happy! It was lovely to see our friend Austen win his first ever final with a great drive. Well done Austen.

It’s time for the Grand National. We manage to fix Frankie’s problem and leave Phoebe’s untouched. 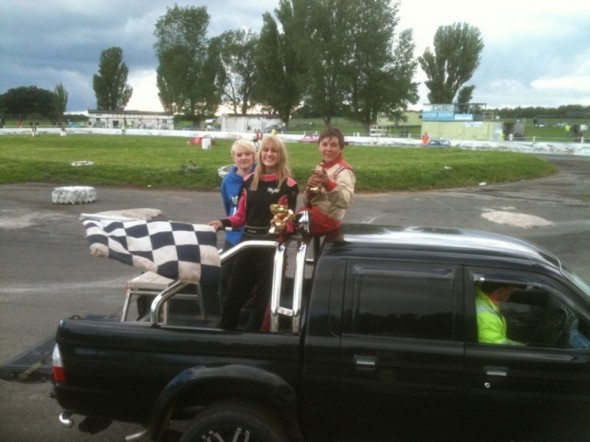 Phoebe after her GN with, with runner up Simon Roper.

Once again Phoebe is driving well and glides her way cleanly through the traffic. Frankie is going better too until a driver spins in front of him, and by the time he gets going again he has been passed by quite a few others.

In the meantime Phoebe has reached first position! And this is where she stays, taking her second win of the day. Frankie keeps going and finishes in 12th place.

An awesome day for Phoebe! She has picked up some fantastic qualifying points which is looking good! Not the best of days for Frankie but he’s always happy no matter the outcome.