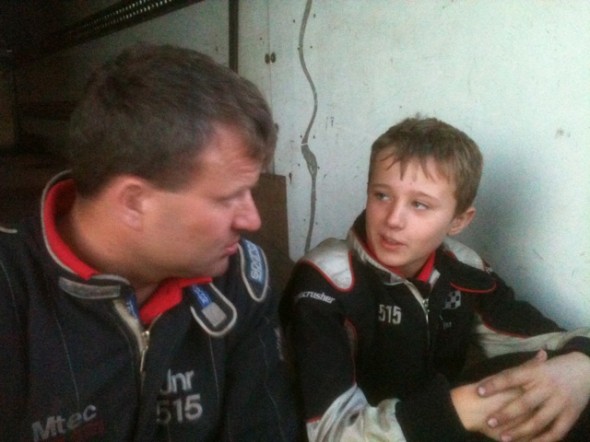 We decide to take Phoebe & Frankie to Skegness. Sam Jacklin (137) is in need of a lift too so we tow him behind on the trailer.

We leave home at 3.30pm and arrive at Skegness for 6.50pm. The sun is shining and the crowd is very impressive! Big Foot is there too ready to entertain the crowd.

Within half an hour it’s time for the first heat, all 27 cars are in! Could be some action tonight? 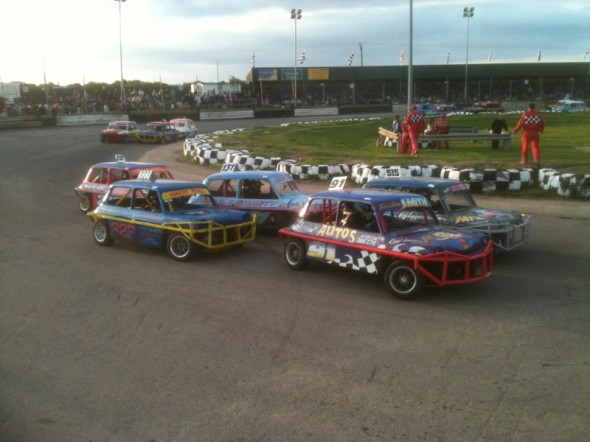 Frankie at the front of the blues and Phoebe at the back.

Phoebe starts from the back of the blues and Frankie JJ from the front. Both get off to a mint start and are at the front of the blues by the time they reach the third corner. Then we have waved yellows which will mean a complete restart. Sam Roper has rolled over, his car is towed off leaving a puddle of oil and thankfully Sam is okay.

On the restart both Phoebe and Frankie get off to another good start. Phoebe gets up there and is leading for a while. Simon and Max catch her and they have a terrific battle, superb clean driving by all three as they exchange places. Harry Peal passes Phoebe but she takes him on the inside on last corner for third place. Frankie was spun out, he got going well again but lost too much time to qualify for a top ten position. 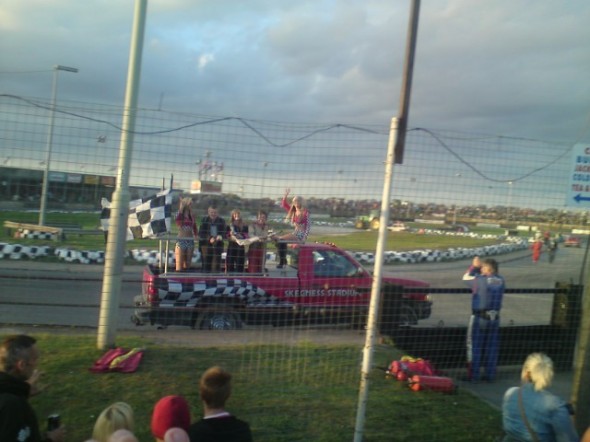 Phoebe on the lap of honour after finishing third in Heat 1.

Time for the second heat. All cars are in again, and Phoebe and Frankie both get off to a great start. Another restart as there are four cars spun out in various places of the track. On the restart Frankie couldn’t get his gears and dropped a few places. Phoebe was leading with four laps to go when she got ‘side swiped’ by the second placed driver. Phoebe hit the big tyre on infield really hard and that’s where she remained until the race had finished. Sam Jacklin had a great battle for third place and Frankie finished in eleventh. 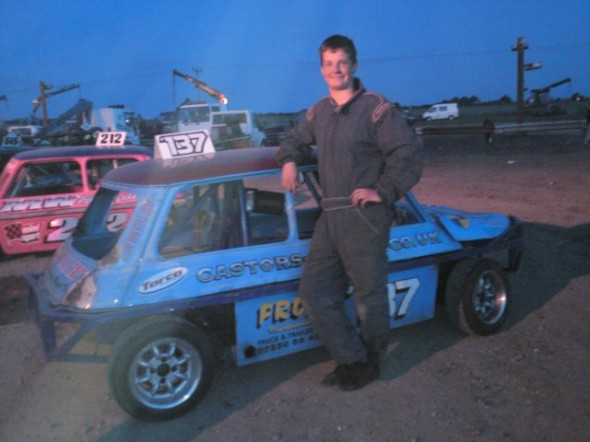 Back in the pits and Phoebe is quite upset. She will race anybody fair all day long but ‘side swiping’ is a dirty trick and it’s starting to occur on a regular basis by just a very small handful of drivers, and it’s not just our two who are targeted! The drivers responsible spoil the race for other competitors as well as put them in danger and cause damage. They only get a warning but this obviously isn’t enough as week after week they keep re-offending!

Anyway it’s Final time. Frankie hasn’t qualified so has to start from the back. Phoebe has enough points to start from front blue outside, and gets off to a good start. She starts to exchange places with a few drivers. Max 777 and Hayley Williams 26 have caught her up, she keeps going and they don’t seem to be getting away too much. She’s in about fourth place when she decides to put the bumper into Harry Peal. She has never put ‘the bumper in’ before and unfortunately gets it wrong and goes in with him. Thankfully it wasn’t too hard and nobody gets hurt, although Harry’s older brother sees red and doesn’t let off, and drives into Phoebe flat out!

The race is stopped and all offenders are sent to the infield. Frankie however has managed to get up into sixth place from the back! Good lad! He has the drive of his life, and has a great race with Karl Hawkins 275 to the last bend! 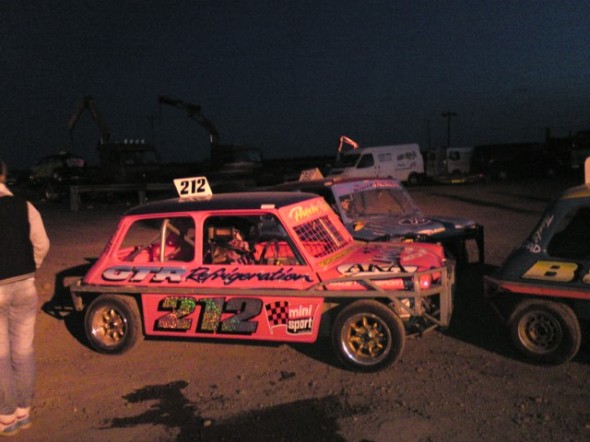 Phoebe lining up for the final.

In the pits and Phoebe and myself are called up to the box. After receiving a complaint, they decide that Phoebe must be loaded up for a deliberate ‘follow in’. So because she got her very first hit on another driver wrong she must retire for the rest of the meeting and will not be allowed to race until further notice.

So Phoebe misses the Grand National but Frankie lines up feeling confident after his great drive in the final! His start is great and he looks to be going really well, until he collides with another driver and spins, he is facing the wrong way and is hit pretty hard. The marshals check on him and he gives them the thumbs up so no race stoppage. For 6 laps he sits there watching the fast traffic coming towards him, finally he manages to restart his car and rejoins the race on the last lap and limps over the line!

So a night of mixed emotions! Frankie feels disappointed with his last race, but that’s racing!