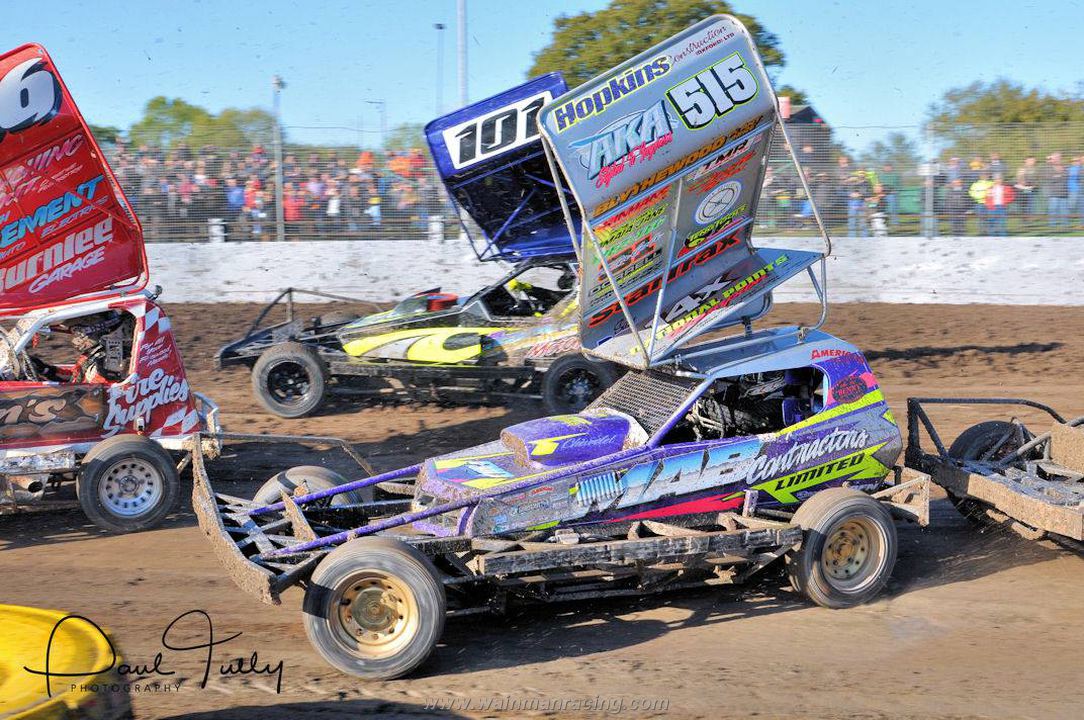 Hi, just a quick update on the King’s Lynn meeting.

After the motorway being shut last time and us only just making start time, we decided to leave an hour earlier, so 11-30am this week. A good trip down this time, no traffic, no hold ups meant we arrived about 3-30 and after a 30 minute queue to enter the pits we started to unload and get sorted.

The return of the 555 machine plus 175 in my recently purchased Richard Howarth car meant we had 5 cars to look after tonight,so let’s hope for a nice steady evening…

Me and Phoebe were first up in Heat 1, and as soon as the green flag went my car felt bloody fast, so fast after a few laps I was right up into the top 6! I’ve tried to stop watching and looking out for the kids when I’m racing but, I could see Phoebe was still ahead of me and as I hadnt seen her anywhere she was obviously in a good place. As I was chasing a couple of blue tops I watched Phoebe fly past 502 and 541 and take the lead, and was pulling away from them nicely.

It’s a strange feeling as a parent knowing the car that’s leading, that you’re going to have to catch and pass for the win is your daughter, but that’s just racing I suppose.

Couple of laps later and unfortunately there is a yellow flag, so Phoebe’s lead is cut to nothing, and it also meant Tom was only one car behind me. He seemed to struggle the first part of race, or was I just amazingly fast… can’t have been that, I’m too old to be fast according to my kids…

So Phoebe led the pack off from the restart and again she pulled away from the persuing cars. Me and Tom traded blows for a few laps, which we both seemed to enjoy, but he managed to get the better of me as my left rear rally tyre had too much tread on hence the speed at the beginning of the race, but as the track was fast drying it started to let me down for grip. All I could do was hang on and cheers Phoebe on as Tom started to reel her in. She took the last lap board still leading, but Tom made his move on the pits corner, just nudging her wide enough to leave her too far back for a last bender, but an excellent second place for Phoebe and fourth for me.

The second heat for me started off very fast again, and was looking good until I got a bit of a hit and felt my headphones pull and make a funny noise. Quickly worked out my radio had broken free from its bracket, but where had it gone? Had it jumped out of the car? No, it managed to find the one place in the cab where it would slow me right down – under the bloody throttle pedal! This only allowed me just under half throttle for over half the race. Nothing I could do but cruise round on a Sunday drive, but still managed another fourth place.

Phoebe was on a high from the first heat, but ended up getting battered and bruised, the car coming off with plenty of bent bits so it was all hands on deck to try get fixed for the Final .

Frankie has good couple of heats with two eighth places and was happy with his return, so tyres were all sorted and cars fixed as best we could and out for the Final.

The track had been watered and the first few laps were fairly slippy, resulting in me being spun round by couple of other cars so I was on the back foot right from the off, and then a small misfire added to delays. This we found to be a plug lead had come loose and burned through on the headers.

So, under powered but still battling through, I was running about fourth or fifth, and Tom was in the lead, but a lap later his engine started to smoke really badly, and then three laps later it let go, resulting in a yellow flag.

I was sat in third place with about three laps to go and 55 and 502 to beat on 7 cylinders, would this be possible?

Well, I had a go. I knew I had to hit Ricky onto Finn the first corner if I stood a chance, but Ricky wasn’t near enough and Craig sailed off for the win. I managed second place which wasn’t too bad on 7 cylinders.

So we replaced the plug lead and went out for the National. Struggled for grip most of the race due to a bad rally tyre on the left rear, which broke up badly as the race went on. Still came home in fourth place though, so a good haul of points for the evening and The Chase challenge.

Skegness next, not sure if and what I’m racing as my engine isn’t finished yet, so will see what the week brings.