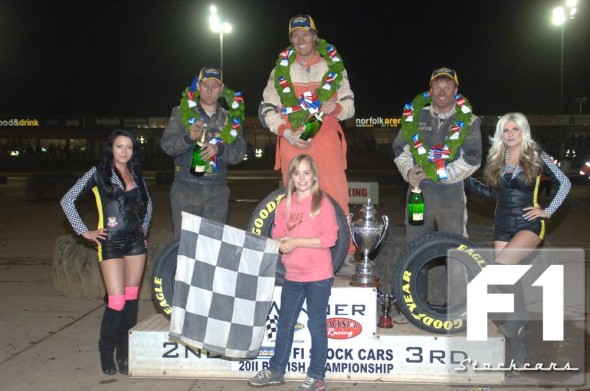 On Saturday morning I drove the mini truck over to Manchester as Phoebe and Frankie JJ were racing at Stoke. Thankfully former F1 driver Steve Jacklin (136) has agreed to take them along with his son Sam.

Get back to the farm at 11am, managed to get most of the loading up done the night before so hope to leave for King’s Lynn at 1pm. Journey goes well without any truck or traffic problems, a few fans pass in their cars and give us a toot! Even a fan with a 391 sticker gave a honk without a rude gesture! All was good.

Arrived at Kings Lynn approx 5pm, already a good atmosphere and lots of race fans getting ready for tonight’s entertainment.

I go out for Heat 1, the car felt good and I won which was a good start to the evening! In between races I’m getting feedback from how the kids are doing at Stoke. Phoebe managed a 4th and said she liked the track and that her car felt mint. Frankie JJ had trouble with his gears but was sorted to go out for his next heat.

In heat 2 we tried a different rally tyre which was not as good, managed to get 5th position. Back into the pits we decided to put original tyre from 1st heat back on, but things were not as plain sailing as they were in other heats, I got spun out twice, resulting with a flat tyre and a DNF.

In the British Championship I had qualified to start on 4th row inside. I managed to get a cracking start, up to 3rd place on first lap where I stayed for a while, and then got a bit keen and ended up climbing over Tom which put me nearly a lap down. The car still felt good and with thanks to a waved yellow or two managed to get back up to 3rd position and that’s where I finished.

Overall I was pretty chuffed to get back to third, and pleased for Paul Harrison winning it in style!

Journey home goes well, arrive back approx 3.30am. Sunday morning, 8am I set off for York to pick up a chassis from the paint shop. Go straight from York to Manchester to collect Phoebe and Frankie, and drive back in time to take family out for dinner.